On Monday, June 11, ’12, history was made as the National Hockey League’s Los Angeles Kings became champions. Wait a minute! What does a Chabad Chasidic Rabbi know about hockey? Actually, not a lot (but I am teachable).

Sara Chana Silverstein, a Lubavitcher from Crown Heights and mother of 7, who specializes in areas of alternative medicine and herbs, was featured this morning on CBS in a segment about the natural way to repel bugs and heal mosquito bites. 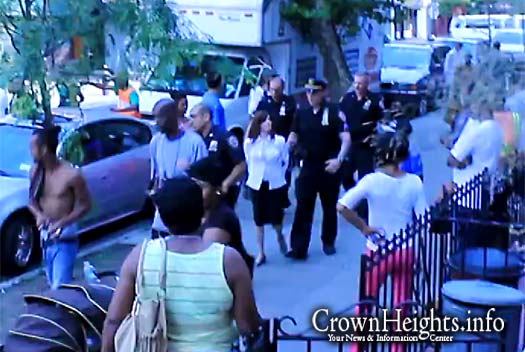 Sarah Mina Setton (nee Huebner) being led away in handcuffs.

A scuffle broke out yesterday between a Jewish Woman and an African-American teenager at Crown Heights’ Brower Park. According to witnesses, the altercation broke out when a young African-American girl threw a glass bottle, after which the Jewish woman went over and punched the child. This caused an uproar among the many African-American bystanders, one of whom called the police.

NY Times
Along Eastern Parkway in Crown Heights. In 2002, 33 percent of city respondents identified themselves as Orthodox Jewish; in 2011, 40 percent did.

After decades of decline, the Jewish population of New York City is growing again, increasing to nearly 1.1 million, fueled by the “explosive” growth of the Hasidic and other Orthodox communities, a new study has found. It is a trend that is challenging long-held notions about the group’s cultural identity and revealing widening gaps on politics, education, wealth and religious observance.

Rabbi Mendel Jacobs, Rabbi of the Shul in the Park in Glasgow, Scotland, officiated at the wedding of David McGraddie and Leslie Goldinger, a Jewish couple who decided to have a traditional Chuppa and Kidushin despite their old age. Under the Chuppah, the groom wore a talis with the traditional Scottish Tartan fabric woven into the ‘Crown.’

Dozens of students from colleges across the United States arrived in Kfar Chabad, Israel in June as part of an exciting and stimulating Chabad on Campus IsraeLinks tour. They were accompanied by Rabbi Zalman and Yehudis Bluming and their family.

The author of a popular new series of English translations of classical Torah works tells the story of his own journey back to Yiddishkeit. His life is now devoted to helping make that process easier and more accessible for others.

For the 21st consecutive year, Chabad of the West Side, directed by Rabbi Shlomo and Rivka Kugel, hosted a gala dinner at a posh Manhattan ballroom to recognize those whose accomplishments help make the center’s activities a reality. 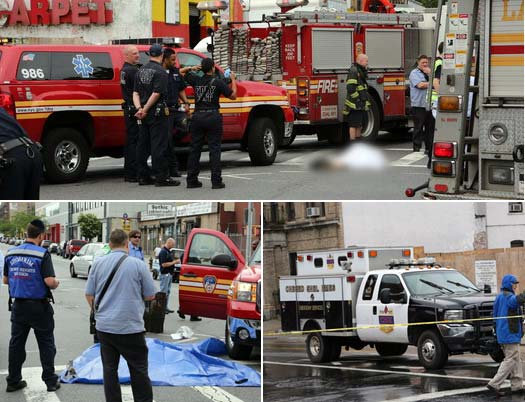 CROWN HEIGHTS [CHI] — A Jewish woman in her early 20s died after being struck by a truck as she was crossing an Empire Boulevard intersection this morning.

New York City councilman Charles Barron may be on his way to winning the Democratic nomination for Congress in New York’s Eighth District, despite a history of racist, anti-Semitic, and anti-Israel rhetoric. Barron, who has earned the support of retiring congressman Ed Towns, would be representing a district with a sizable Jewish population.

Shmuel Marcus of 8th Day was in Mostly Music in Boro Park yesterday, signing CDs of the group’s brand new release, “All You Got.” He was joined by Country Yossi, much to the gathered crowd’s surprise and delight.

Ever since early winter the offices of Camp Gan Yisroel Detroit have been buzzing with preparation for their annual summer program. Year after Year, CGI Detroit has proven itself as being the ultimate summer camp experience, combining authentic Chassidishe Chinuch with a wholesome physical program.

Rabbi Zushe Silberstein believes that every female should experience the joy of a bat mitzvah ceremony. So when the opportunity arose for two intellectually challenged ladies to do so, he and his wife Bayla made it happen.

Walter Sobchak described his Sabbath observance in the Coen brothers’ classic The Big Lebowski by saying, “I don’t roll on Shabbos.” I’m not much of a bowler, but I don’t roll on Shabbos, either, and neither do I fly. This became a problem on Friday afternoon when trying to return home from meetings in Boston for Shabbat with my family. The captain announced over the loudspeaker: “Ladies and gentlemen, there are funnel clouds in D.C. The airports will not open until 9 p.m.”