LOWVILLE, NY [CHI] — Troubled dairy plant Tubroburg, which produces the Emes milk and cheese products under the Hechsher of the CHK, has been shut down today by the Department of Agriculture and all operations were ordered to be suspended. This comes on the heels of their electricity being shut off by National Grid over a dispute on bills.

WASHINGTON [JTA] — Former U.S. Sen. George Allen, who said the denial of his Jewish roots helped bring about his ouster, is running for his old seat.

Several classes of Beis Rivkah in Montreal got to participate in a remarkable program on the Rebbe’s history.

Pictures from the wedding of Osher Broh (Melbourne, Australia) and Ita Barber (Crown Heights) that took place on January 19, 2011 in the Razag Ballroom, Crown Heights.

Long recognized as a one of the most brilliant minds of the past generations, but whose writings were primarily relegated to the purview of a small cadre of scholars, the Rogatchover Gaon – literally, the “genius of Rogatchov” – has for many years occupied a lofty space, inaccessible to the masses.

CROWN HEIGHTS [CHI] — Descendants of the Shpoler Zayde, Rabbi Yehuda Leib, gathered for the annual Seudah commemorating the miraculous saving of his life on the 19th of Shvat 218 years ago. At his requests the entire family hold a Seudah celebrating his great miracle.

HONG KONG [CHI] — Hundreds of members, admirers, and supporters of the combined Jewish communities of Asia joined together to celebrate Chabad of Asia’s silver anniversary this past Tu B’shavat. The event was held in Hong Kong, where Chabad first planted its seeds in the Orient 25 years ago with the arrival of Rabbi Mordechai and Goldie Avtzon. Today, over 26 Chabad Houses comprise the fabric of Jewish life in the Far-East. Please take a moment and say a Kapitel Tehillim for a Refuah Shlaima.

Avrohom ben Libe who will be having surgery tomorrow, Tuesday

CROWN HEIGHTS [CHI] — Vandals targeted Oholei Torah Friday night with anti-Semitic hate graffiti. The vulgar scrawl was found on the steps leading up to the main ballroom on Friday night.

At least 31 people were killed and more than 100 injured on Monday in a suicide bombing at Russia’s biggest airport, Russian news agencies reported.

CROWN HEIGHTS [CHI] — Over 30 Alumni and Staff of the Yeshiva Ottawa came together for a night of Farbrengen and Inspiration in honor of Yud Shvat. It was not just a Farbrengen, it was also a night to congratulate 50 weeks of consecutive Torah learning by the Bochurim.

Cold enough for you? Bone-chilling cold is prompting some schools around the area to delay openings and some to cancel classes all together as meteorologists warn residents in some parts of New York to stay inside as a blast of arctic weather takes aim at the Northeast.

Red carpet events, V.I.P. cards, flashing paparazzi lights and… Crown Heights? On Friday, February 4, more than 300 teenagers from across the country will gather at the annual National CTeen Shabbaton, where they will enjoy a glamorous V.I.P. weekend complete with a celebrity appearance and a black-tie NYC river cruise. 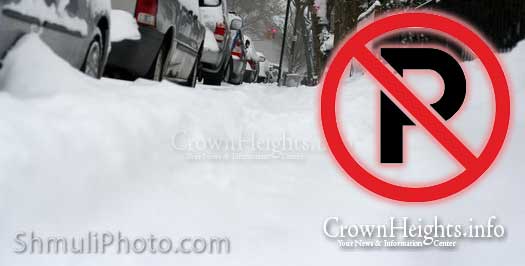 Alternate Side Parking (street cleaning) rules will be suspended citywide on Monday, January 24 for snow removal. Payment at parking meters will remain in effect.