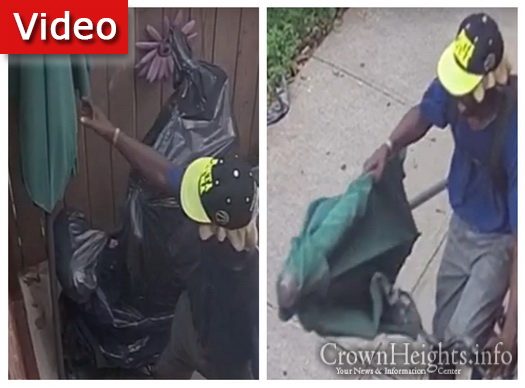 A Crown Heights home was the victim of another bizarre theft this week. A thief felt the need to slip the bolt of a back yard gate to steal a table umbrella. The man got away clean with his prize, besides for the clear video footage of his deed.

Sometimes a persons urges are so strong, that even if the act is wrong, they will still break the law. Others have cravings for things they really don’t need, but will go many lengths to get anyway. Then, there’s this guy.

Video surveillance of the bizarre theft shows as the man rode his bike to the back yard gate of a Crown Heights home, and bypasses the gates bolt lock. The man enters the back yard, and makes directly for a large table umbrella, leaning up against the gate.

The man took his precious prize and hopped back on his bike, riding down the street and made his getaway.

This theft follows a slew of assaults, car break-ins, package thefts, a car jacking, and vandalism that have plagued the Crown Heights community over this past month.

If you have had a theft or break in, please sent the footage to news@CrownHeights.info, or whatsapp it to our number 718-285-8000.