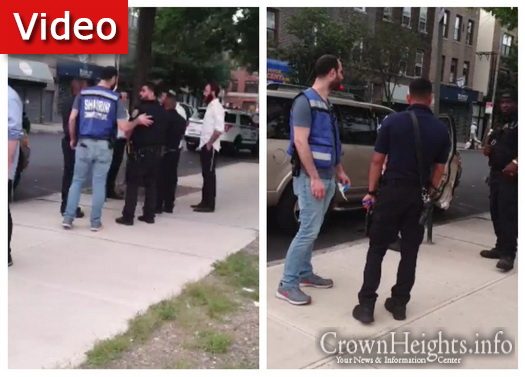 A Jewish man was beaten with a stick and pepper sprayed just before shabbos in what is being characterized as a Hate crime. The perpetrator was arrested by the NYPD, with the help of Crown heights Shomrim.

Two Jewish males had been standing on Carroll Street and Schenectady Ave when a man, describes as a black male, walked by and said “You (expletive) Jews! Hitler should have finished you off!” The two Jewish men, shocked at the hate filled words, responded.

The situation quickly got out of control as the perpetrator pulled out a canister of mace, spraying one of the Jewish men in the face. The second man, attempting to intervene, was also assaulted as the perpetrator picked up a stick and hit him in the head.

Shomrim and police arrived as the perpetrator fled up Troy Ave between President St and Union St, where he was apprehended and arrested.

The assault is being treated as a hate crime, and is being investigated.

NYPD’s Brooklyn South Chief and the 71st Precinct have also assigned extra coverage to the Crown Heights area in response.

Minutes before #Shabbos our Vol responded to calls for an assault in which the attacker used mace. Great response and #collaboration with @NYPD71Pct results in one UNDER arrest #ItsWhatWeDo #EyesAndEars pic.twitter.com/PccSI0oxoS