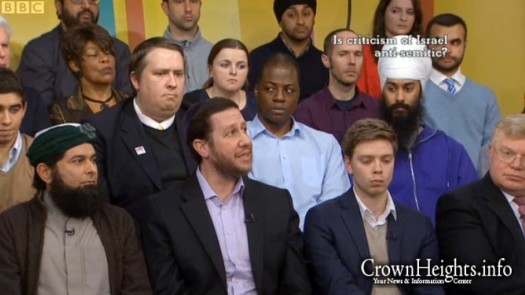 Sitting with an Imam on one side, a priest on the other and a Jewish anti-Zionist opposite was never going to make the question, “Is criticism of Israel Anti Semitic,” an easy one. That was the big question on yesterday’s BBC1 ‘The Big Questions’ program. The question emerged on the back of MP David Ward saying he’s surprised Jews haven’t learned the lessons of the Holocaust in the way they treat Palestinians.

When I took the initial call to come onto the program I was reluctant to make the four hour round trip journey on an early Sunday morning. Having sat there as the lone sheep amongst the wolves, I was glad I did.

My immediate response to the question was that it is absurd to suggest that criticism of Israel is Anti Semitic. But it is also absurd to suggest that Anti Semites don’t use Israel as a whip with which to lash out against Jews everywhere. Somewhere in between the lines get blurred. Thus to use the Holocaust – which goes to the core of Jewish sensitivity – as an attack on Israel, is Anti Semitic, however unintentional. Moreover, the analogy is wholly absurd because it suggests that Jews are committed to a final solution in wiping out all Arabs which is just fundamentally wrong.

When Tony Greenstein, a Jew and founder of the Palestinian Solidarity Campaign insisted the analogy between the Holocaust and present day Israel was justified I accused him of stomping on the graves of his ancestors. When a priest, Reverend David Jennings agreed that Ward’s language was “unfortunate” but hesitated when I pushed him on whether it was Anti Semitic, it was obvious to me how deep the problem runs.

It became further obvious to me when logging onto twitter several hours later. There were many flattering remarks (and even a surge of new followers) but the rhetoric that came out of left field, not just the name calling, but references to the Hebrews in Palestine, and the suggestions that I should be deported, all prove how Anti Semitism is alas alive and well in this country. I maintain as I’ve always said, Anti Semitism is not some disease like polio that can be eradicated with legislative medicine. It is a deep irrational hatred – a sleeping dog that looks to rear its ugly head when opportunity presents itself. Yesterday’s interview on The Big Questions was just another one of those opportunities.

But it was my final remark which set tongues wagging. I finished by explaining that prejudice is defined by something universal for which only one person or people are singled out. When in the 1920’s the then Harvard University President wanted to bar Jews “because they cheat” it was pointed out to him that non-Jews cheat too. He countered, “You’re changing the subject we’re talking about Jews now.” That’s deliberate bias against Jews i.e. Anti Semitism. Similarly, singling out Israel when there are far worse human rights offences going on in other parts of the Middle East is deliberate bias against Israel. The debate was cut at that point leaving one outstanding question which several people tweeted to me later: “Rabbi, you suggested that there are other violations in other parts of the Middle-East which are worse. Do you then concede that Israel is also guilty of human rights violations?”

Let me clarify the point: I do think that no democracy is above reproach and I am sure that Israel makes mistakes. I do not however subscribe to what others might define as Israel’s human rights violations in this context.

Israel is the only democracy in the Middle-East. Contrast the spectacle of the recent elections and the current coalition building process underway in Israel with the way Egyptians are still rioting violently on the streets because of their constitution. But let’s condemn Israel. Contrast the way Israel will convict soldiers proven guilty for human rights abuses – such as Lt. Col. Omri Burberg who was responsible for firing an unprovoked rubber bullet into the leg of a 27-year-old Palestinian Ashraf Abu Rahme – and the way many Palestinians hail their soldiers heroes when they fire fatal bullets at Israeli soldiers. But let’s condemn Israel. It now emerges that women are systematically raped in parts of India, and stoned to death for the ‘crime’ of being raped in Somalia, but let’s condemn Israel. There’s civil war raging in Syria with thousands of women and children being killed with only limited and occasional criticism emerging from world leaders. But if Israel supposedly puts a foot wrong, the condemnation is loud and robust. The current President of Egypt refers to Jews as apes and pigs and still gets courted around Europe. If Netanyahu dared to use similar language against Muslims, do you think he would be tolerated in the same way?

Israel responded to human rights accusations already back in 2005 when they unilaterally withdrew from every inch of Gaza, dismantling twenty-one settlements in the process and uprooting 8,000 Israelis. They were rewarded with an Iranian-backed terror base fifty miles from Tel Aviv and an increase of rocket fire targeting random civilians. Is there another country in the world that would tolerate this? When Israel did finally respond it did so with intent to minimize casualties. Leaflet drops, text messages and thousands of calls were made encouraging people to leave. Who did the UN Human Rights Council single out for condemnation? Israel of course!

Does all this mean that Israel always does things right? By no means! Does this suggest that there is a systematic approach to delegitimizing Israel? Absolutely! Let me make it abundantly clear I am all in favor of a peaceful co-existence with whoever Israel’s neighbors might be. But that has to be premised on recognition of Israel’s right to exist, as yet not forthcoming, and with Israel’s security as top priority. I must also stress that I am opposed to all forms of human rights violations. I have no hesitation in criticizing Israel or its politicians when deemed necessary and I have done so in the past. But if I was to consider the balance between fact and fiction today I always revert to a simple comparison: If an innocent Palestinian was to talk through the streets of Tel Aviv or Haifa this evening I think any honest individual would agree he would be able to do so peacefully. But if innocent ol’ me was to walk through the streets of Gaza tonight, with my yarmulke on my head – how far do you think I would get? . . . But let’s condemn Israel.