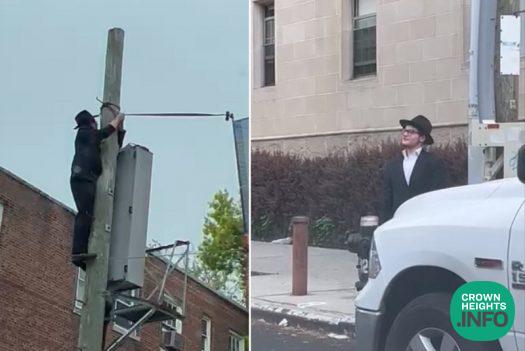 After an Extended Break From Mischief, Two Boys Vandalize Sign Over Kingston Ave

A sign providing information about buses arranged to transport Lubavitchers to and from the Ohel on Lag B’Omer was cut down Friday afternoon, by none other than two Lubavitch boys.

The two brazen boys were caught on cell phone camera in broad daylight as one climbed a pole to cut down the sign stretched above the Ave, while the other looked on and grinned.

Menachem Benchemon, the person who arranged the buses to and from the Ohel, named the two as Moshe Nachman Karelefsky, originally from the Flatbush area, and Shalom Baruch of Crown Heights as the two taking down and vandalizing the banner.

The two boys have a history of vandalism and assault in Crown Heights, with video proof which led to a short-lasting arrest of Moshe Nachman last year.

Benchemon, who has been targeted by the pair in the past, remained defiant, stating in a WhatsApp message that “We are still on schedule,” apparently blowing off their vandalism as having no affect on his plans.

While the reason for the vandalism is not clear, the two have been known to attack those they feel are advocating or insinuating about the Rebbe’s passing.