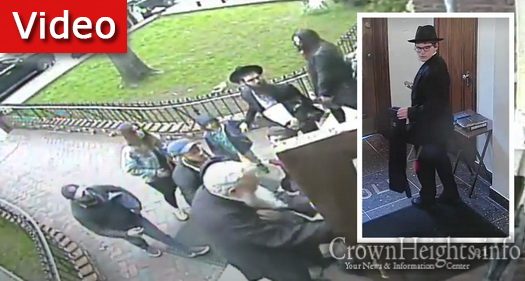 Video footage of another absolutely shocking assault on Rabbi Chaim Boruch Halberstam – the caretaker of upstairs 770 –  has surfaced, highlighting the lawlessness presently prevailing in the Central Chabad Shul.

The video from Sunday morning shows as a young bochur, identified by Rabbi Halberstam as Moishe Nachman Korolefsky, loitered in the lobby of upstairs 770, waiting as Rabbi Halberstam completed a tour of the Rebbe’s room for a small group.

Once Rabbi Halberstam exited the room, Korolefsky, who had just recently turned himself in to the police for a previous assault on Rabbi Halberstam, followed behind the crowd as they headed to the front door. As the group exited the building, the door was being held open by Rabbi Halberstam, and it’s there that the video turns absolutely shocking.

While partially obstructed by the door of 770, the video shows as Korolefsky assaults Rabbi Halberstam, appearing to attempt to shove him down the front steps of 770.

In the intervening months, while Moishe Nachman remained an active nuisance and criminal, the police refrained from actually arresting him, instead waiting until he “turned himself in” accompanied by a Crown Heights resident posing as his legal guardian, according to a source familiar with what went on in the precinct. The resident then signed responsibility for Korolefsky, gaining him a date in family court and remaining free to continue to assault Rabbi Halberstam.

Following Sunday’s assault, the police were again called, and as in their previous attempts to hold Korolefsky responsible, they did nothing. Instead, they advising Rabbi Halberstam to hire a bodyguard, according to someone present at the time.

The absurd part is, the bodyguard would have to be extra careful not to actually touch Moishe Nachman, as then the bodyguard could face charges for assault.