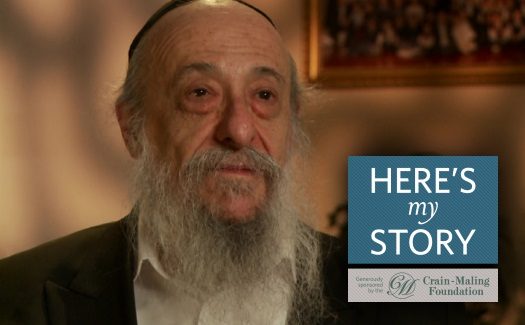 Rabbi Yitzchak Maier Gurary is a mashpia, spiritual mentor and teacher of Chasidic philosophy, at the Lubavitcher yeshivah in Montreal. He was interviewed by JEM’s My Encounter with the Rebbe project in his home in January of 2011.

I was born in 1941 in New York to a Lubavitch family. I was nine years old when Rabbi Yosef Yitzchak Schneersohn, the Previous Rebbe, passed away, but it wasn’t till I turned ten that Rabbi Menachem Mendel Schneerson became the Rebbe and formally took over the leadership of Chabad-Lubavitch.

What I remember about him from that time is that he was always busy. He wasn’t a person who would sit around and chat. He was always doing something. When I saw him walking in the street, his mouth was always moving, as he recited words of Torah. He never wasted a moment.

The other thing I remember is that he refused to stand on ceremony. Although he was not yet the Rebbe, people were already treating him as such and – out of deference – trying not to shake hands with him. But he wouldn’t have it, and he’d extend his hand to them. I remember that once, on a Shabbat during the period between the previous Rebbe’s passing and his formal acceptance of the leadership, he gave me his hand, but I wouldn’t shake it. He said, “What is this? You also?”

“I’m working on being a chasid,” I responded, and he broke out in a wide smile. At that moment my connection to him began, and I became a chasid of the Rebbe. From then on he took a serious interest in me, shaping my learning as well as my life.

In 1952, the Rebbe gave Chanukah gelt to people who were studying Chasidic teachings. The Rebbe called my father into his office and asked him if he was learning Chassidic teachings with me. My father wasn’t, and he justified himself by saying, “But he is still a young boy.” The Rebbe didn’t accept that. He said, “You must teach him,” and he suggested that we start with a discourse from Likkutei Torah entitled Adam Ki Yakriv, which is a customary entry point into Chasidic philosophy. He also gave my father a silver dollar which I was to receive after learning the discourse.

When it came time for my Bar Mitzvah – which coincided with Parshat Shemot, the first reading of the Book of Exodus – the Rebbe again emphasized the need for me to study Chasidic teachings. He quoted a maxim of the Alter Rebbe, the founder of Chabad, that “one must live with the times,” meaning that we must relate the weekly Torah reading to our lives. He pointed out to me that, in speaking about Parshat Shemot, the Midrash singles out Reuven and Shimon as two who came into Egypt and left Egypt without changing their Hebrew names – meaning that they were not overly influenced by the atmosphere of the Egyptian culture. Their names mean “seeing” and “hearing,” an allusion to seeing and hearing G-dliness in this world, which is best accomplished through the study of Chasidic teachings. “This is a lesson for you,” the Rebbe concluded. “The only way you can keep from being overly influenced by the secular culture around you and stay focused on G-dliness is by studying Chasidic teachings.”

When I was fourteen, I came to see the Rebbe on the occasion of my birthday, accompanied (as usual) by my father. Seeing us together, the Rebbe said to me, “You are a man now, so you should come by yourself.” And I understood that the Rebbe wanted to have a direct connection with me, not just through my father.

A year later, again on the occasion of my birthday, I went to see the Rebbe alone and, this time, the Rebbe told me something which had a great impact on my life. I had asked him why it is that when I make resolutions I can rarely stick to them.

“Sometimes,” he explained, “you make a promise to Hashem that you will become a better person in some particular way, but a few days later you are back to your old self. This happens for two reasons. One reason is that you set an unrealistic goal for yourself, and it’s just too big for you to sustain. The second reason is that you procrastinate implementing your resolution. But if, instead, you set a small goal for yourself and you start working on it immediately, you will have a much greater chance of success.”

On another occasion, the Rebbe told me that every day before prayers, I should read a Chasidic teaching. “It’s not important how long it is, or whether it’s simple or complex. You could even recite something which you know by heart. What’s important is that you take it seriously, not do it by rote.”

He also advised me to pray with extra concentration for a few pages and then bend the corner of the page to remind myself where I should pick up the next day, when again I should pray with extra concentration for the next few pages and again bend the corner of the page.  This way – over a period of days – I would have truly prayed every part of the service with additional intention and concentration, something which might be hard to do from beginning to end on every given day.

The Rebbe also told me to learn by heart the beginning of Chapter 41 of the Tanya, where the Alter Rebbe describes the divine presence and stresses the importance of awe of G-d. This subject came up in our conversations four or maybe five years in a row, each time I came to see him for my birthday. “Learn it by heart, learn it by heart,” he emphasized. “Keep going over it again and again. The more times in the day you go over it, the more influence it will have on your life.”

Besides seeing the Rebbe in private audiences, I also corresponded with him. I recall that, when I was fifteen, I wrote to him complaining that I wasn’t successful enough in my Torah studies. The Rebbe replied that since I was learning in the Tomchei Temimim yeshivah – which had been established by the Rebbe Rashab and directed by the Previous Rebbe – I would have success. “Don’t worry,” he wrote. “Just put your mind to it, and you will be successful.”

At another time, he gave me this tip: “If you lose interest while learning a certain Torah topic and you find that your mind is drifting away, don’t force yourself to continue, but instead change to another Torah topic. This way you won’t get stuck or distracted, and you can return to the previous subject later, when you have a fresh mindset.”

This is just some of the wise advice that the Rebbe gave me when I was a youngster. And this is how the Rebbe shaped my approach to learning and to life.