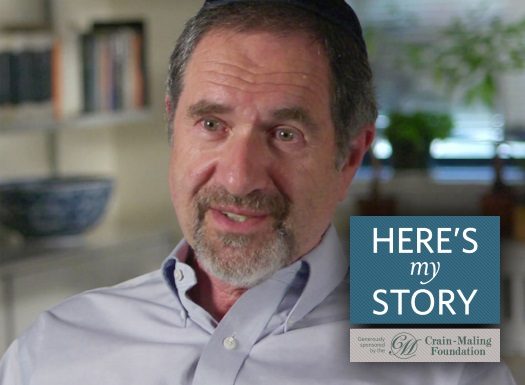 Mr. Charles Samuel Ramat is presently co-chairman of Neurotrop BioScience, a biotech firm trying to develop drugs to save the lives of terminally ill children and Alzheimer’s patients. He was interviewed by JEM’s My Encounter with the Rebbe project at Chabad of the Upper West Side in April of 2016.

I am a son of Holocaust survivors. While my parents did not suffer in the concentration camps, they lost their entire families during the war. They met after liberation and made a home in Vienna, where I was born in 1951. But, because of the anti-Semitism in Austria, they ended up coming to America when I was four – initially settling in Cleveland and later in Monsey, New York.

In 1967, when I was 16 and she was only 42, my mother found out she had terminal breast cancer. I was a wild teenager at the time, and so she asked me to go to Israel for a year and learn in yeshivah with the hope that I would settle down. I would have done anything for my mother, and so I went, enrolling in Keren B’Yavne. Learning there was a very meaningful experience for me – I spent a lot of time studying Jewish ethics (mussar), especially the writings of Rabbi Eliyahu Dessler. At that time, I was befriended by the dean of the yeshiva, Rabbi Chaim Goldvitcht. Afterwards, whenever he came to the United States, he would look me up, and I would become his personal chauffeur.

One day in 1969 he called and asked if I could drive him to a meeting with the Lubavitcher Rebbe. Of course I said, “It would be my pleasure. What time and where should I pick you up?” It turned out the meeting was at 2 a.m. – something I hadn’t bargained for – but since I promised, I drove him. When we got to Chabad Headquarters, he went in to see the Rebbe while I waited outside.

At this time, my mother was still very ill. One of her doctors was advising that she have radical surgery, while another doctor was advising a harsh course of radiation. Neither doctor saw much hope.

The whole family was devastated by this situation and neither my father nor my mother seemed able to make a decision as which type of treatment to pursue. So, taking the opportunity that Rabbi Goldvitcht’s meeting presented, I asked permission to speak with the Rebbe about this issue.

I cornered the Rebbe as he was saying good-bye to Rabbi Goldvitcht, half-expecting that he would put me off. It was 3:30 a.m. and I thought he’d say, “I’m tired now. Ask my secretary for an appointment.” But instead, he said, “Please, please come in.”

Now, my father had previously spoken about this matter with another Chassidic Rebbe, who had recommended a name change for my mother and gave us a list of Psalms to recite. I kind of expected the Rebbe to give us similar advice. But he surprised me. He first asked my name, where I lived, and then asked for details regarding my mother’s situation.

It turned out he knew the doctors who were treating her, and when he heard the grim prognosis, he was very sympathetic and helped me prepare for the worst. He never said that a miracle would happen. Because he was so realistic and did not raise any false hopes, he captured my heart. At that moment I felt he was the wisest man on the planet.

When the audience was finished, he said, “Please keep me informed as to what happens.” And being the eighteen-year-old chutzpan that I was, I shot back with, “Are you just saying that? Or do you really want to hear from me?”

He answered, “I would never say something I didn’t mean.”

After I left – even though the Rebbe told me to prepare for the worst – I did not feel depressed. To the contrary, I felt that a burden had been lifted from me. It was as if the Rebbe said to me, “Whatever happens, it will be okay.” As a result, I was able to help my mother choose the treatment option that would help her preserve some kind of quality of life, instead of tormenting her physically when there was no realistic chance of success. As it happened, she declined both surgery and radiation and just opted for palliative treatment, which let her make the best of whatever time she had left. She lived another two months and then lapsed into a coma.

Following her passing, I came to see the Rebbe again and again to discuss various life issues. I was able to confide in him. I could say to him, “Rebbe, I’m having a crisis of faith. I really do not believe. I love Judaism; I love a lot of the rituals, but they are not really part of my life.”

On each occasion, the Rebbe’s response was absolutely deep and incredible – and tailor made to me. Once, he asked me, “Do you keep kosher? Do you put on tefillin? Do you keep Shabbat?’

I answered honestly, “I don’t.”

He then said to me, “If I ask you to do one thing without any precondition, will you promise me you’ll do it?” I said, “Yes, anything you ask me, I promise you I will do it.” He then said, “Will you and your wife agree to light Shabbat candles every Friday night?”

And from that point on, we have never missed lighting Shabbat candles. Friday night became sacrosanct for our whole family. When our kids were teenagers, they did not go to parties that night. Even though I had all kinds of business dealings going on, Friday night I always made a point of being home.

To me, this was the genius of the Rebbe. Had he insisted that I become fully observant, I might have tried, but it would not have lasted. And yet, this one mitzvah has kept my family on a Jewish path throughout our lives, and my daughters have followed suit.

In another meeting with the Rebbe, I asked him what I could do for him in gratitude for all he had done for me. He said, “You can’t do anything for me, but you can do things to help other people through me. Look into your heart and see which project you would like to support. Choose what speaks to you – that way, you will truly invest yourself in our work.”

I did what he asked. One of the Chabad rabbis gave me an overview of the entire Chabad Movement, which impressed me to no end. I saw that, in addition to being probably the greatest spiritual leader of our time, the Rebbe was also the greatest CEO, the greatest tactician, and he developed a worldwide organization that does incredible good. And ever since I have been proud to support its work.