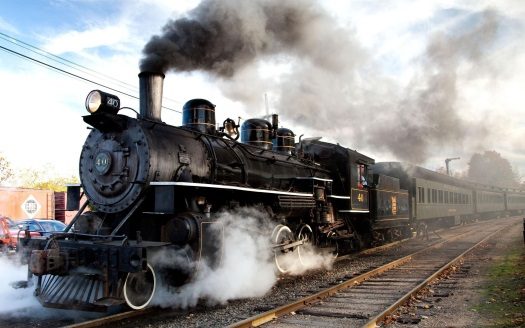 There was an elder yishuvnik (a person who lives his entire life in a village), whom we will call Yehudah. One day he received a letter from a friend of his youth inviting him to participate in one of his children’s wedding. Together with that invitation, was a train ticket for the train ride and a note.

In the note the friend wrote, “You have been provided a first class train ticket from your town to mine. However, since this is the first time you are going on a train, I must warn you that there are many pick-pocketers and thieves. Don’t hold the ticket in your hand as it will be ripped out without you realizing who took it. But rather you should be careful, place it in your wallet and show it to the conductor only when he asks for it when you are already on the train.”

The big day came and Yehudah prepared to go on the trip. Remembering the warning he received of the dangers that can befall on him, he took the ticket and put it in an envelope, which he placed in his shirt pocket. He then put on an extra shirt over it covered by a pull over sweater and then a jacket and a coat. “No pick-pocketer will take the ticket away from me,” he declared triumphantly.

Arriving at the train station he asked someone in uniform what time the train is supposed to go to his destination. He then stood on the platform with just a few other people. They all looked respectful and decent, but he reminded himself, looks can be deceiving. His friend warned him that some of them are thieves, so he kept to himself.

However, the moment the train pulled into the station, all of a sudden dozens and dozens of people rushed onto the platform. Yehudah was astonished and impressed as how these people knew the exact time they should arrive and didn’t waste their time waiting for the train to come.

However, Yehudah was confused which section of the train he was supposed to go on. So he figured, being that these people know exactly when the train arrives, they must be experienced, and so he should follow them. However, he noticed that they all split up and went towards different cars. So he followed those who went into the car closest to him.

Entering the car he saw benches along both sides of the train, and an aisle between them. However, to his astonishment all the people who just boarded the train crawled under various benches, although there were many empty seats on the benches themselves.

Bewildered as to why people pay to travel like that and not to sit on the benches, but thinking that that these people looked like they were experienced and know what they are supposed to do, so he followed their lead and also crouched under a bench. When I will arrive at my friends’ house, I will ask him to explain this strange conduct to me. A minute later the train continued on its way.

Yehuda crawled out and the conductor pointed to the exit and barked, “We will be stopping shortly and you must get off.”

“But I have a ticket to that city, and my friend told me that it is not the first stop, so I will get off there and not here.”

Turning to the passengers sitting on the benches the conductor mockingly announced, “Our ‘esteemed’ visitor has a ticket.” He then turned towards Yehudah and said, “Well, let me see your ticket.” So Yehudah took off his coat followed by removing his jacket, and then pulled his sweater over his head, and began opening his first shirt while everyone was trying to suppress their laughter and the conductor was beginning to lose his patience. He did not have time for these charades.

Finally, Yehudah took out the envelope, opened it, and gave the ticket to the conductor.

Looking at the ticket, the conductor was perplexed and he exclaimed in bewilderment, “If you have a first class ticket, you are supposed to go to the first two cars where you have cushioned and spacious seats. So why are you traveling under the bench, like a bum and a trespasser?” Yehudah was afraid and replied, “I merely followed everyone who got on at the station.”

“And why did you hide the ticket like that?” asked the conductor.

“Because my friend told me that there are many thieves by the stations and that I should be careful,” he innocently responded.

Realization began to dawn on the conductor. So he said kindly, “This is your first train ride. So your friend told you to be careful from the thieves. The thieves are those who hid under the benches. But you mistakenly thought that you should follow them. When we stop I will take you to your proper seat, until you arrive to your destination.”

I heard this classical mashal from Reb Mendel Morosow sheyichye, he then continued and the nimshal (moral) of this is: Yehudah is every Jew, while tthe ticket represents the neshama of every Jew, which is his passport and guide to reach his destination safely. However, before it descends into this world, it is informed of the dangers it may encounter in this world and it is instructed to take the proper precautions.

However, while some passengers stand confidently with their train tickets and know where they are supposed to go and do, and don’t become confused by what others around them do, there are some like Yehudah that are clueless and instead of asking the conductor or others for guidance, he thinks he can figure it all out on his own, and his conclusion is that the proper way to conduct himself here, is to follow the crowd. They seem so savvy and smart. So they are his compass of navigation, instead of using his proper compass.

In essence, he is following the very way which he was told to be careful from. Simply put, instead of conducting himself as he should have, he followed the lead of those who don’t have a proper pass and guidance, and conducted himself as they did.

But then comes along the conductor and informs him that this way he can’t reach his ultimate destination. At that point he cries out, but I have a ticket and a mission to accomplish, don’t derail me. Then the conductor encourages him to undo the concealment of his neshama. Once the neshama is revealed he goes from under the bench to the comfortable seat, and lives and conducts himself as a neshama should, accomplishing its mission on this world.

May we all bring out our true essence which is that every Jew is one with Hashem and a Jew not he desires or can be separated from Hashem.

Wishing all of you and indeed all of Israel, a gmar chasima tova in all material and spiritual aspects.