« Weekly Unique Photos of the Rebbe
Shabbos at the Besht: The Mezuzah » 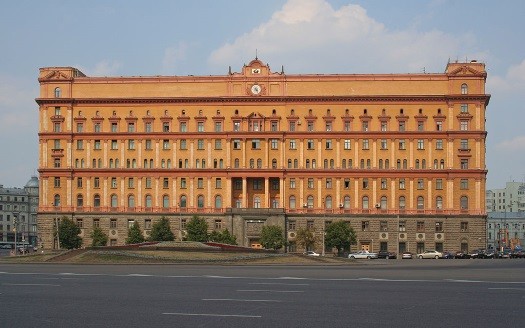 The Lubyanka Building, the NKVD (and later KGB) headquarters in Moscow.

The following story happened years after the Frierdiker Rebbe was freed from his imprisonment and was allowed to leave Communist Russia. However, their hatred towards him and what he stood for was as strong as ever, or perhaps even stronger than before.

Reb Yechiel Michel Rapaport, was arrested at the same time as other chassidim, in the 30’s or perhaps early 40’s, and was accused of activities that undermine the Republic. He knew he was facing serious consequences and was hoping to minimize his punishment. He decided to admit to almost all the accusations, to show that he is an honest person, (as well as knowing that they had all the”proof” they needed anyway), but he will vehemently deny the most serious one against him.

So when he was being interrogated, he asked them, “Why have I been arrested? What are the charges against me?”

They began listing his “sins” and then concluded with venom, “And you are a Scheersonki [someone who is connected to and doing the work of Rabbi Schneersohn of Lubavitch]!!”

From the tone of their voice, he realized this is their main point, all of his other “terrible and egregious acts of subversion against the government,” are almost non-existent, in comparison to this final accusation. So according to plan, he was going to argue forcefully only against that one.

He asked the interrogator, “Why do you accuse me of being a Schneersonki?”

The interrogator stated, “You are a religious Jew.”

Reb Yechiel Michel nodded his head as confirmation; there is no reason to deny the obvious.

The interrogator continued, “All religious Jews say a blessing, before they eat food, but you place your hand over your yarmulkah, when you recite the blessing. Only a Schneesonki does that!” he thundered.

‘I do that, because that is how my parents taught me to recite the blessings, when I was a young boy. It has nothing to do with anyone else, replied Reb Yechiel Michel.

“And why do you wear a woolen pair of Tzitzis, even on the hottest days of the summer. It makes one sweat and itchy, but you won’t even think of wearing one made of cotton, that is worn by other religious Jews. Only Schneersonkis’ do that!”

Once again Reb Yechiel Mechel’s answered, I am used to this from my youth and it doesn’t bother me.

And why did you have a Lubavitcher Rabbi officiate at your wedding, if you are not associated with him or his followers?

Because, he is the only Rabbi that is left in the community, replied Reb Yechiel Michel. I had no other option.

And so it went, why two pairs of tefillin and why don’t you even trim your wild beard, and why this and why that; to all the questions and accusations the response was basically, this is how I was raised and I am comfortable with it. It is as simple as that.

Seeing that they are not giving up, he changed the conversation. Instead of him answering their questions, let them answer his. So he asked, “Can you explain to me what your problem is? You state that I am a practicing Jew, and I admitted to that. You state that I don’t hide that I am religious and thereby am trying to be an inspiration to others, and my response is I am not telling anyone to do as I do, but maybe I am guilty of demonstrating that according to the Constitution, one is allowed to observe his or her religion. I admit to almost everything you say. So why are you trying to force me to say I am a Schneersonki?”

The interrogator replied, my father is one of the highest ranking offices in the secret police and he taught me, just as you say, your father taught you. He taught me, “Every individual that acts against the government, is a person with an illness. So what do you do to a person that is sick? You have compassion on him and you heal him.

“Now, what is the medicine and healing process for this type of sickness? Normally it is three years in Siberia. If the person is really, really, sick they need an extra strong dosage of medicine and five or six years in Siberia, heals them from this sickness. They return, with the proper patriotism and contribute to the advancement of our wonderful country. This works without a failure.

“However, there are exceptions to every rule, and the exception to this rule is a SCHNEERSONKI! They can get this special medicine for ten, fifteen and even twenty years, yet they are never healed. They remain exactly as they began or perhaps even sicker and more defiant.

“For them,” concluded the interrogator, “There is only one medicine, and that is a bullet.”

He was then sentenced to sixteen years of labor in Siberia.

The mashpia who repeated this story concluded, He conducted himself as a Schneersonki, when it was extremely “hot” under the collar. He was well aware of the dire consequences that were meted out against many chassidim. Yet, he didn’t waver a moment.

So to us, when the only consequence is that it is hot summer days and the woolen tzitzis might make me sweat a little more, but nothing more than that, shouldn’t we proudly demonstrate and proclaim, WE ARE SCHNEERSONKIS!!!

Rabbi Avtzon is available to farbreng in your community and can be contacted at avtzonbooks@gmail.com.

« Weekly Unique Photos of the Rebbe
Shabbos at the Besht: The Mezuzah »