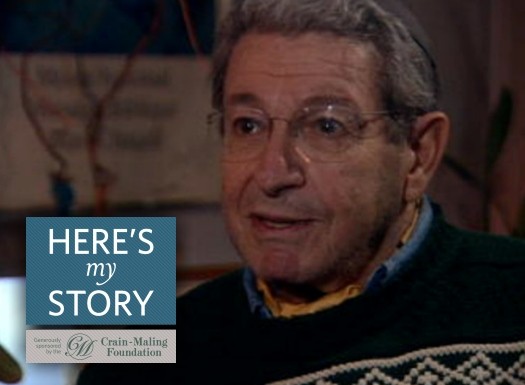 Here’s My Story: Chivalry on the Upper East Side

Jules Lassner was an influential businessman and community leader in Bogotá, Colombia, and New York City, serving for many years as president of Cong. Orach Chaim on Manhattan’s Upper East Side. A Marine Corps veteran who fought in World War II, he was interviewed by JEM’s My Encounter with the Rebbe project in his home in Manhattan in January of 1999.

During the war years, my father-in-law, Boris Gorlin, worked with the Rebbe – when the Rebbe was not yet the Rebbe but the son-in-law of the Rebbe, employed at the Brooklyn Navy Yard as an electrical engineer. It was in this capacity that he had frequent contact with my father-in-law who was also involved in the war effort.

After the war, their association ended, and it was not until 1977 that my father-in-law saw the Rebbe again. I was present at their meeting, and this is the story I would like to relate here.

At that time, our Upper East Side synagogue needed a rabbi, and my father-in-law decided to ask the Rebbe for a recommendation. So, we made an appointment for an audience, prior to which we were briefed by the Rebbe’s secretary how to behave. We were to walk in and stand in front of the Rebbe, who would be sitting at his desk; we were to state our business, listen to what the Rebbe had to say and then excuse ourselves. The secretary would signal us to leave by opening the door; when the door opened we were to back out of the room.

But nothing went according to plan. When our turn came, the Rebbe came to the door, escorted us in and refused to sit down until we were both seated. He also offered us a drink, and then signaled to the secretary that he didn’t want to be disturbed. He seemed genuinely delighted to see my father-in-law after all these years, and it appeared he expected it to be more than just a brief visit.

The Rebbe first inquired about our family. “How is your daughter doing, Boris?” he asked, referring to my wife. And then he asked specific questions about her work in Jewish education – though how he knew she worked in Jewish education, I have no idea.

He went on to ask us about what goes on in the Jewish community of the Upper East Side, and the first thing he wanted to know was: “What are you people doing for the Jewish women over there?”

Back then, unlike today, there weren’t any Torah classes for women, so we didn’t have an answer.

He persisted, “Don’t you have women’s programs at your synagogue?” When he heard we didn’t, he asked, “What about a mikvahs? How many do you have?”

Truth be told, we didn’t have any, and our women had to travel to the West Side of Manhattan or to the Lower East Side, or to Washington Heights in order to immerse in a mikvah.

He also asked about how we conducted our Shabbat services, and which schools we sent our children to. But his emphasis was clearly on women’s issues, which impressed us to no end. We couldn’t imagine a chasidic Rebbe caring so much about this subject. And later I learned that he was the one responsible for establishing that wonderful mikvah in Crown Heights – and not only establishing it, but personally making sure that it was fully equipped. When I heard that, I was just amazed.

Our meeting lasted about forty-five minutes, and it was a very special experience for both my father-in-law and me. In fact, I would say it was one of the greatest experiences of my life. I’ve met with several heads of state, including the president of the United States, but nothing compared to meeting with the Rebbe. Nothing.

Some ten years later, I had the privilege of meeting him again.

Prior to that second audience, my father-in-law and mother-law – along with my wife and me – were invited to tea by the Rebbetzin. There had clearly been a very special relationship between my father-in-law and the Rebbe and Rebbetzin, because when she saw him, she just lit up. This meeting took place a few months before she passed away, and she was seemed very frail at the time, yet there was an uncommon strength emanating from her, which I cannot find the words to describe. She was clearly a great woman. But what astonished me more than anything was that she knew everything about the audience we’d had with the Rebbe ten years earlier. Apparently, he had shared with her every detail, and she remembered it all!

Shortly after this meeting with the Rebbetzin, my father-in-law became sick and he wanted to see the Rebbe again to get a blessing for a speedy recovery. But private audiences with the Rebbe were no longer possible. However, my mother-in-law called the Rebbetzin and explained the situation. The Rebbetzin said she would see what she could do, and five minutes later she called back with an appointment time.

We went as a family on a Sunday, the day the Rebbe handed out dollars for charity; we were the first in line, and we got to speak to him one by one. When my father-in-law was talking with the Rebbe, I overheard the Rebbe reminding him of an upcoming yahrtzeit of an aunt or an uncle, and I was just astonished how this man remembered these little details with everything that was on his head on a daily basis.

When my turn came to speak with the Rebbe, I had the chutzpah to say: “Having met your wife, I understand the expression ‘Behind every great man, there is a great woman.’ I met that great woman.”

When the Rebbe heard that, he broke out into a broad smile. I’d say he was very pleased to hear his wife’s greatness recognized.

He was a man who cared deeply about women’s issues – as he made clear to us in our first meeting – and the woman whom he obviously cared most about was his Rebbetzin. The saddest image I have in my mind is seeing the Rebbe walking behind her coffin – ram-rod straight as a soldier, doing his most painful duty to escort his wife to her final resting place.