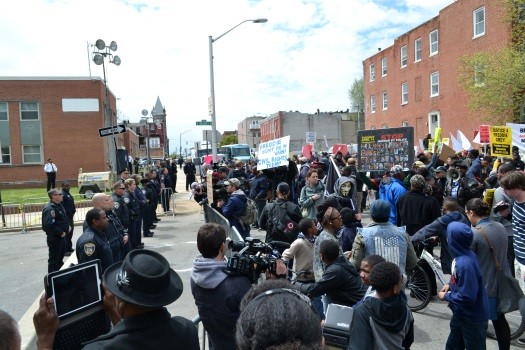 Story: What a riot! In the (Jewish) Heart of Baltimore’s Inner City

The following heartwarming and inspiring story was sent to us by Rabbi Levi Kaplan, Shliach in Baltimore, MD. It was written by K.Y.L., a Lubavitcher therapist working in Baltimore’s inner city public schools:

I would like to share with you a true story that recently happened to me. I am a first year graduate student at a Social Work school, and part of the curriculum includes interning at a social work position twice a week. My assignment was an internship at a Baltimore inner city elementary/middle public school. The school has approximately 450 students in pre-kindergarten through eighth-grade; it is 99% African American, 1% Latino, and has 4 white students. The first student assigned to me was an eleven year old African American boy in sixth grade named Tyrone who was having behavioral issues.

In our first session I became acquainted with Tyrone and his family. His parents are divorced, his mother remarried, and he is living with his mother and stepfather. He has four siblings: a thirteen year old sister, a five year old brother, both attending the same school, and three and two year old brothers. The social worker informed me that his mother is deaf, and his father is deaf in one ear. During our second session, he asked me about my “hat” (yarmulke). When I told him that I’m Jewish and Jews wear a yarmulke, he said “Oh, I’m Jewish too,” and mentioned that his uncle wore a hat like mine, and his grandparents are Jewish. I was surprised and skeptical about his assertion, particularly because of his tendency to stretch the truth.

During our fourth session, while talking to the social worker about the holidays, he mentioned that his family celebrates X-mas and Hanukkah. The social worker exclaimed, “Why don’t you to speak to the intern about Hanukkah, he’s Jewish.” He then repeated his claim that his grandparents are Jewish. I told him that I would like to believe him, but because he occasionally tells half-truths, I am doubtful of his claim. He responded, “You don’t believe me? Come let’s go ask my sister.” I followed him to the school gym where we located his sister. He asked her, “Isn’t it true that our grandparents are Jewish?” She responded, “Yes, my maternal grandparents are Jewish!” I asked her what her mother’s family name is and she told me the name. (I researched the family name and discovered that it is a family name of Jews who lived in Islamic countries). “That means that you’re Jewish!” I told her. She said, “Yes, I know, I even have a Jewish name, Elizabeth.” (It turns out that Elizabeth is a Greek transliteration of the Hebrew name Elisheva. When relating this story to a school social worker that I know, he told me that Elizabeth is a very uncommon name amongst African Americans). She also told me that her her parents had met in a School for the Deaf, and added that her uncle lived in Israel. When I told Tyrone, “That means that you’re Jewish”, he responded, “Yeah, you see, I told you so.”

Standing in middle of the gym, I had shivers running down my spine and goose bumps all over my body. What is the statistical chance, that an inner city public school in Baltimore, which is 99% African American, has not one, but three Jewish children – Tyrone, his sister, and brother, and that the first student assigned to me is Jewish? The answer- zero, zilch, nada. I was amazed by the hashgacha pratis; how the Hashem doesn’t forget and forsake his five African American Jewish children and their mother.

Regrettably, I am prevented from initiating a personal relationship with Tyrone and his family, because the social work code of ethics prohibits a clinician from maintaining a dual relationship with a client. However, I emailed the mother and informed her about the Jewish programming and assistance that Chabad of Baltimore provides. The following is an excerpt of her email response; “Tyrone and Elizabeth told me a little about you… It would be nice for all of my children to learn about being Jewish because I don’t know much. It would be great for my kids and me to join with Jewish people and learn about the holidays and have some Jewish resources and programs. I’m glad Tyrone told you about it… please update me about the programs.  Thank you and I look forward to hearing from you soon.”

Chabad of Baltimore is trying to raise $5,000 to arrange a bar mitzvah for Tyrone, assist Tyrone and his family with their needs, and help them relocate to the Baltimore Jewish community. Any assistance that you can provide to help Tyrone and his family would be greatly appreciated. To donate please click http://www.alephlearninginstitute.org/#!tyrones-bar-mitzvah/c1q9h​