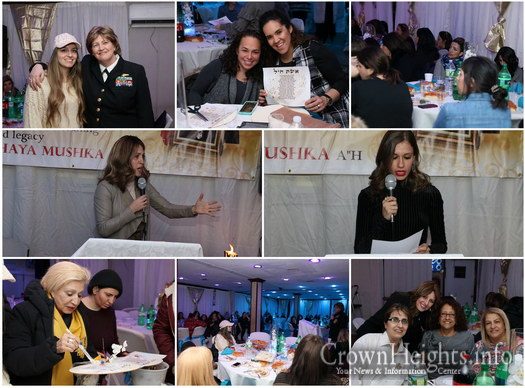 The annual Chof Beis Shvat Women’s Dinner last night at Chabad of Georgetown, Brooklyn filled Rabbi Avrohom Holtzberg’s Shul with the many community women. Beautifully set up, and with musical accompaniment by the talented cellist Laura Melnicoff the atmosphere was perfect. The evening, emceed by Sterny Holtzberg, began with the candle lighting ceremony and the recitation of the Rebbe and Rebbitzin’s Kapital by the Shlucha Rebbitzin Shulamis Holtzberg.

The first speaker of the evening was Mrs. Miriam Lipskier, co-founder and director of the Chabad Student Center at Emory University in Atlanta, Georgia. The women sat mesmerized soaking in every word of Mrs. Lipskier’s unique perspectives of how one should see the world and fellow man. Being a Shlucha on Campus it was interesting for the women to hear how Mrs. Lipskier copes with the challenges she faces on a day to day basis but still always rises above with the one goal in mind; spreading the light. Everyone really took a valuable lesson home from Mrs. Lipskier. She very charismatically gave over the idea of not judging a book by it’s cover but instead recognizing their beautiful insides.

The next speaker of the evening was former Lieutenant Commander Mrs. Laurie Lans who has served multiple tours in Iraq, Afghanistan, the Persian Gulf, and throughout the world. Along her many journeys she had erected a giant Chanukah Menorah in Saddam Hussein’s Palace in Baghdad, celebrated Pesach in Saddam Hussein’s Hunting Lodge, arranged for a Kosher Megillah to be read high in the hills in Afghanistan, and so much more.

While stationed in war zones, Laurie told us how she upheld her duties not only militarily but also as a Jew despite the obstacles she faced. The crowd laughed with her, cried with her but most of all everyone was deeply inspired by her strong character and devotion to her beliefs and what strength she possesses.

The question answer panel following showed the women’s deep interest and showed they internalized the powerful life lessons that were given over. After a beautiful handmade project was made, every woman in that room left that night with a new perspective on how a Jewish woman can and should conduct herself. It was truly an evening to remember and kept everyone looking forward to next year.