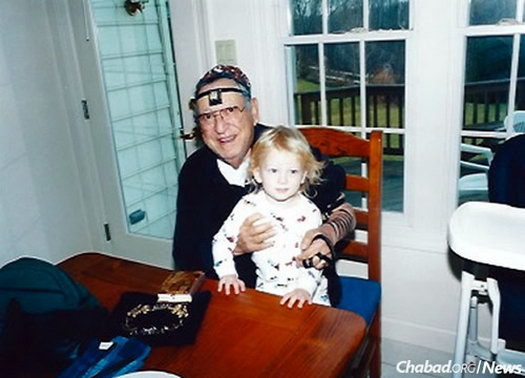 Hyman Millstone and his first grandchild, Aidan, with the tefillin and prayerbook given to him by a “man from Chabad” on the campus of San Diego State University in the 1970s.

<b>Rachel Millstone</b>, a congregant at Chabad of East County in San Diego, CA, relates how an unexpected mitzvah performed by her father on a college campus in the mid 1970s transformed their entire family for generations.

from Chabad.org by Rachel Millstone:

My father would have been 94 this summer. Born the first son of Russian Jewish immigrants, Hyman Millstone spent his youth in Squirrel Hill, a neighborhood in Pittsburgh with a significant Jewish population. My mother, some 20 years his junior, was his second wife; she, too, was born in Pennsylvania’s second-largest city.

My parents decided to move out West, to San Diego in Southern California, and start a family. I remember my father later saying that his memories of growing up in Pittsburgh during the 1920s and ˋ30s were influential in his turning away from Judaism. He was bullied as a child for his name; children called him “Hymie” and “dirty Jew,” and beat him because of his faith. Later, he was rejected several times from medical school because of a Jewish quota that was in place at the time; however, he was allowed to teach chemistry to medical students at the University of Pittsburgh. I suppose this embittered him, and he moved away from his faith and the area to begin anew.

I was born the second child of four in San Diego and named in a synagogue at my mother’s insistence. My mother wanted us to be more observant—to keep kosher and send us to a Jewish school, but my father didn’t feel the same way.

Still, I spent my summers as a young child at the Jewish Community Center, swimming with my father and my sisters, Heidi and Deetzah, and with my baby brother, Joshua.

My father worked as a teacher and took courses at San Diego State University around the year 1973 or so. One day, a man from Chabad approached him on campus and asked if he was Jewish. My father said “yes,” The man entered a van and came back out holding something, and asked if he could teach my father how to lay tefillin. My father again replied “yes.”

The man was from the university Chabad House—the Chabad House at SDSU—on Montezuma Road. He taught my father, and gave him a set of tefillin and a small prayerbook, and told him it was his duty as Jew to do this every day. I do not know what transpired between that man and my father. I do not know the chord he struck with my father, but I know that he did strike one. Maybe a memory? I’ll never know.

But I do know that shortly after this encounter, my father was hospitalized. He remembered the man from Chabad and made a bargain with G‑d—that should G‑d allow him to live, he would indeed lay tefillin every day.

My father came out of surgery and from that day on wrapped tefillinevery morning (except for Shabbat). This, in turn, led us to change synagogues, where I learned to read Hebrew, and learned prayers and Jewish history. My mother lit Shabbat candles every Friday night, and we celebrated the Jewish holidays. Eventually, my family became more observant, kept kosher-style, but never completely kept Shabbat (we drove to shul).

My father passed away in December of 2006; we buried him in Pittsburgh, which remained near and dear to him despite his rough childhood.

He was blessed to know his four grandchildren (the children of my sister Heidi and her husband, who live in Cleveland). All four of them used to watch my father put on his tefillin. He would tell them the story of the young man who taught him this mitzvah and told them how important a relationship with G‑d is. Those boys—his grandchildren—are now 18, 16, 14 and 12. All of them have gone to Jewish day schools, and all of them are shomerShabbat, and fine young men who love G‑d and Israel. The third one, Noah, has my father’s tefillin and prayerbook.

Our family is indebted to the kind mitzvah of this stranger. The day my father met that man and put on tefillin changed the course of our family’s lives. I truly believe that. I am so proud that the next generation of our family—my father’s grandchildren, my nephews—are strongly rooted in their Judaic faith.

I am sure mine is just one of thousands upon thousands of stories that attest to the incredible work of Chabad.

All I can offer is my sincere gratitude.

The author lives in Southern California and frequents Chabad of East County in San Diego, co-directed by Rabbi Rafi and Chaya Andrusier.