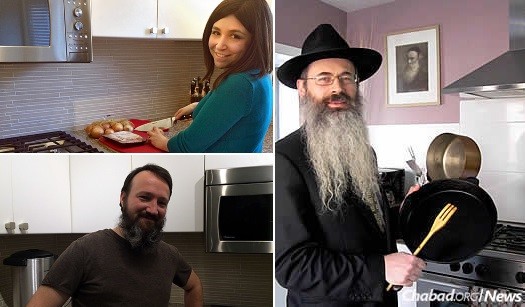 First Kosher Kitchen an Entranceway to a More Spiritual Life

Calev (Eric) Taylor, 39, and Malkah Esther (Michelle) Glass, 32, remember when Rabbi Uri Gelman showed up at the front door toting a blow torch, giant tongs, a large metal pot and industrial-strength gloves. He boiled their kitchenware, ironed their counters and advised them on how to make sure everything was just as it should be. He was there to make their kitchen kosher.

The couple started keeping kosher when they were living in Downtown Toronto in a 700-square-foot loft. They were driving up to two hours roundtrip to Toronto’s northern suburbs to learn with Rabbi Mendel Kaplan, executive director of Chabad Flamingo in Thornhill, Ontario.

They had their first kashered kitchen in that apartment, and later, in a townhouse they moved to in 2010. That one was kasheredby Gelman, the founder of Kosher Way Canada, while Taylor was going through a learning process at Chabad Flamingo that ultimately led to his decision to convert. They again had their kitchen done in 2012, just after his conversion.

Glass grew up with some knowledge ofkashrut. Her family had two sets of dishes and ate kosher meat at home. But it wasn’t until she got involved with Chabad that she started delving deeper into the details.

When Taylor decided he wanted to convert, Glass started studying Torah and attending Rabbi Kaplan’s classes with him.

Kaplan—who leads one of 72 active Chabad centers in Canada, continues the Jewish outreach work started by the Lubavitcher Rebbe—Rabbi Menachem M. Schneerson, of righteous memory—in connecting Jews of all background and in all places with their shared heritage.

This year marks 40 years since the Rebbe launched the worldwide kosher campaign in an effort to create awareness and promote observance of kosher dietary laws.

“When you keep kosher, it changes your life in meaningful ways,” explains Taylor. “It places you within a community and makes you connected to the people in the community. It changes how you view your daily routine, and where you go and where you don’t go. It’s not just about the food—it’s about the location, it’s about the utensils you use, and ultimately, it puts you in a holier mindset and sphere.”

Meanwhile, the couple—who before having kept kosher tried foods from around the world—now seeks out all different kinds of recipes, international and traditional, to make at home. When people come over to the house they now own, says Glass, she wants them to see that kosher food can be exciting and have a global flair.

She especially enjoys making Thai dishes, she says, and has found substitutes that allow her to recreate the tastes in her own kitchen. “I cook Indian, Chinese—all different kinds of foods. You don’t have to feel like you’re missing out on anything.”

Taylor also notes that “you become much more meticulous when you’ve got a kosher kitchen,” which is an asset in its own right. “You become careful about making sure you observe the mitzvah properly and don’t make any mistakes.”