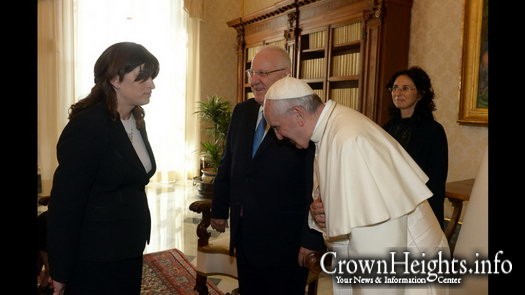 Picture of the Day: Rivkah Would Not Bow

Israeli President Reuven Rivlin paid a visit to Pope Francis in Rome, accompanied by his personal secretary Rivkah – an Orthodox-Jewish woman. When a person usually greets the pope, they shake his hand and bow down. But when Rivkah’s turn came to greet the pope, she explained to him that for religious reasons she could not shake his hand, nor could she bow down since he was wearing a cross. The pope then covered his cross with his hand, and bowed down to her!