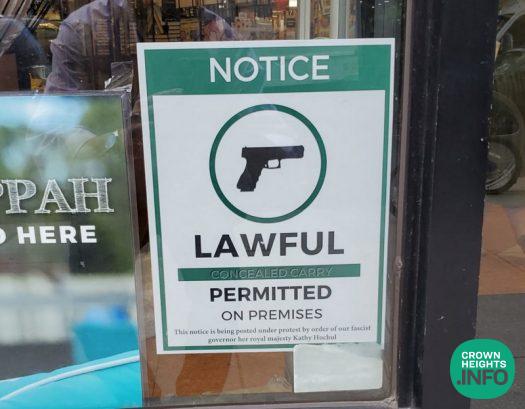 Op-Ed: It’s Time To Stand Up For Our Rights Like Good Citizens

by An Unhappy Resident

During World War II, as the Nazi war machine made it’s way across Europe, the Final Solution was underway. First they singling out and segregated the Jews before exterminating them in each country that they conquered. As terrifying as it is to think, their system worked.

The Wehrmacht quickly marched across the continent and took control of Denmark, where an interesting Myth is told.

As with all other countries, within a short time of taking control the country, a law was enacted that all Jews must wear a yellow star to identify themselves. Not prohibiting others from wearing it, just requiring that all Jews do. In defiance, the myth goes that the Danish king himself proudly wore the star in solidarity with the Jews of his country. Another version says that the gentiles of Denmark wore it instead, effectively making the law useless.

While the stories themselves are just myths, the lesson remains.

On June 23rd, the Unites States Supreme Court issued a ruling that strongly restated the right of US citizens to self defense by carrying a firearm. So naturally New York State hastily began cooking up new laws to further restrict concealed carry permit holders, an already grueling process.

In the confusing and slightly vague law set to go into effect at midnight tonight, September 1st, New York State redefined the rules, stating that “certain areas” are off limits to those with concealed firearms. Those “certain areas” fall into two categories, Sensitive Areas and Restricted Locations.

Sensitive areas are what you might expect from the name. Schools, Shuls, Doctors Offices, and political rallies. In these places, such as in the now famous Times Square prohibited zone, concealed carry is a criminal act.

But the shenanigans really can be found in the “Restricted Locations”, which has now been redefined as any privately owned location without a sign permitting the carrying of a concealed firearm.

In the words of the new law:

(SECTION 265.01-D) “1. A person is guilty of criminal possession of a weapon in a restricted location when such person possesses a firearm, rifle, or shotgun and enters into or remains on or in private property where such person knows or reasonably should know that the owner or lessee of such property has not permitted such possession by clear and conspicuous signage indicating that the carrying of firearms, rifles, or shotguns on their property is permitted or has otherwise given express consent.”

In other words, concealed carry is now CRIMINAL unless a sign is clearly posted saying that it is allowed.

Most wont care much about the new law until they realize that it requires store owners who have concealed carry permits (for good reason), to post a sign outside their store saying that they are armed! This is terribly unsafe as all a criminal will have to do is look for a sign, and if there isn’t one there, he knows that he can rob the store with impunity.

WE WILL BE TELLING THE CRIMINALS WHERE TO TARGET!

The best way to fight this new decree is to nullify it by doing what the Danish did during the Holocaust. If each and every store posts the sign, the restrictions will simply be null and void, the criminals unsure of where to target.

Lets show our displeasure at the slew of new restrictive decrees by following the law, and making it useless.