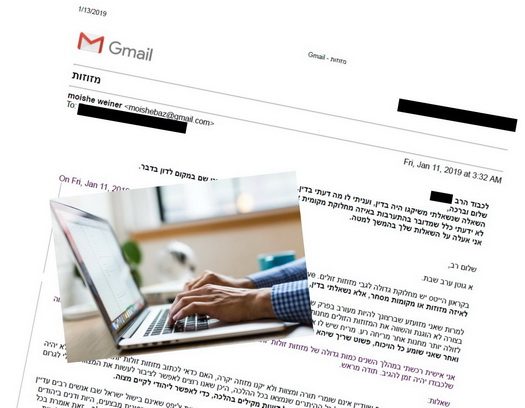 This OpEd was submitted anonymously, and its sources verified by crownheights.info.

Like everyone else, I was smitten by the horror video posted regarding the state of safrus today. I needed clarity and decided to dig deeper. I found out that the noise is all pathetic and the truth is there for anyone looking for it. I’m not part of this fight, but I hate to see reshayim govrim bo – evil winning and saying that all the mezuzos my ba’alei batim have on their homes are pasul. What this individual has brought upon countless families, from children being bullied to fathers not knowing how they’ll pay their bills, is astounding – and we are to blame for allowing it.

Once the letter stating Rabbi Vainer’s opinion came up, I knew I had to get to the bottom of it quick. I corresponded with sofrim and Rabbi Vainer, and found out that Wolf is actually misleading everyone. Here is what I found out:

I’ll be breaking this into a few parts:

What is the real question?

It’s a question of trust. Once mezuzos are (seemingly) found pasul, those stores shouldn’t be trusted.

If comparing $42 mezuzahs and up, the mezuzos from the stores that came out on top in the unscientific experiment are far from being the nicest ones around at each price-point. For one to push people to go to one specific store because “he has the best mezuzahs” is misleading. Know that once you reach the low price point of $42, those that you think are better may actually be of a lower halachic standard than the rest of the stores.

Cheaper mezuzos we will get to in a minute, but all should be trusted in their $42 and up range.

The question of kashrus applies to all mezuzos

We’re only dealing with the mezuzos that are less than $40. All the more expensive mezuzos are written to be more mehudar.

Are the cheaper (below $40) mezuzos Kosher?

Why are stores actually selling the cheaper mezuzos:

People buy cheaper mezuzos either because they can’t afford and/or they’re for mivtzoyim and people will be less likely to spend more for a mezuzah. How many times have we heard people’s shock at how much mezuzos cost and them politely saying “ah, never mind. I’m ok.”

So the real question is only whether cheaper mezuzahs should be sold at all. This is a question of whether one can kosher the mezuzos rather than whether one can pasul these mezuzos. Rabbi Vainer in his emails to me advised that for mivtzoyim and people who cannot afford more expensive mezuzos, one may lechatchila write b’dieved mezuzos – mezuzos with leniencies. At the end of this I’ll explain how b’dieved is lechatchila good.

Rabbi Vainer wrote to me that he isn’t against mivtzoyim mezuzos that are lchatchila written with leniencies and heteirim. Furthermore, one SHOULD rely on the more lenient opinions so that more Jews can keep the mitzvah of mezuzah.

But didn’t a sofer say they’re pasul, so Wolf should be believed?

Safrus is black and white and blanket rules govern it

Much of safrus is judged case by case. Most of the time the rule doesn’t apply as I’ll explain below

Safrus is objective and everyone will have the same opinion

Let’s break this down a bit:

As we see, although Shulchan Aruch states rules, how those rules are applied is subjective. Spacing is an issue, but what is considered spacing is a question. Touching is an issue, but only if the sofer sees it easily. This rule makes it subjective. A reliable sofer who is yarei shamayim has a mesorah of how it’s applied and follows it. And when he’s unsure he asks a rov. For Wolf to come out and state unequivocally that all the sofrim’s mesorah’s are worthless is total apikorsus.

Words about the sofer:

When putting all this together, one realizes that although Wolf makes himself sound credible, he’s far from it. He’s narcissistic, ignorant, too full of himself to be able to comprehend anything other than what he believes. If he doesn’t want to buy cheaper mezuzos, don’t. But don’t go ahead and decide that there should be no cheaper mezuzos at all. The cheaper mezuzos have a place and SHOULD be used for mivtzoyim purposes. (The students of Rabbi Akiva also only saw their way and couldn’t comprehend any other way. We see where that got them…)

Now, an explanation as to how b’dieved works:

There are a number of categories of b’dieved. Among them:

Rabbi Vainer suggested overseer/hashgacha, and that may be overdue. However, let no one come and say that the mezuzos that so many people have on their homes are pasul.