« Weekly Living Torah Video: Inviting Your Non-Religious Child to the Seder
Documenting the Revolution in France » 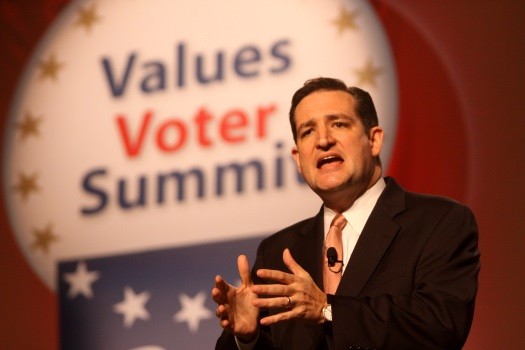 New Yorkers will head to the polls this Tuesday to pick their favored presidential candidate to represent their party in the national election. Crown Heights resident David Shor makes a compelling case for which candidate he believes deserves the Orthodox-Jewish vote – Texas Senator Ted Cruz.

The Election of Our Lifetime
by David Shor

President Obama will be leaving the White House in just a few months, but his legacy may stay. We were told that Obama would be an “historic president”, and he clearly was. Cost of living went up, wages went down, and the world more dangerous and unstable than before. Whether it is healthcare costs, the delegitimization efforts against Israel, or the terror reigning across it, a President Hillary would be no solution. Hillary and Obama are ‘one’.

Donald Trump says that if he were nominee, “states which were never in play before, would be now.” That’s true, only in reverse. States which have always been solidly republican would become battleground states. In no national poll does Trump beat Hillary, and in the Real Clear Politics average of polls, Hillary actually leads Trump by double digits. So even if you like Donald Trump, and you think he’s your best choice, his chance of getting to the White House is nil.  But with Ted Cruz, Hillary is in a dead heat nationally, and states like Pennsylvania would be winnable for Republicans again.

But why even want Trump?

In 2013, when John Kerry’s nomination for secretary of State was brought up for a vote in the senate, Senator Cruz was only one of three senators to have the judgment, foresight, and fortitude, to vote against the nomination. Rewind to 2004, when John Kerry was the Democrat Nominee, Kerry wanted none other than Donald Trump to be his Middle East Peace Envoy. Yes, Kerry wanted Trump to be his man pressuring Israel. Trump has stated that he would be “neutral,” and that Israel would need to concede even more.

When interviewed by the New York Times on foreign policy, Trump was flummoxed by the question of whether he supports the “two state” or “one state” solution. Trump went off on a tangent on an unrelated topic, and abruptly ended the phone call. Senator Cruz has been very clear, unlike Obama, Kerry, and Hillary; he would not prescribe or pressure Israel into any settlement formula. Senator Cruz would treat the matter as an internal Israeli issue for the Israeli leaders, and not Washington or the UN to decide. Israeli “settlements” would be perfectly fine, and ‘daylight’ no more.

When the Iran Deal was being debated in Washington, there was no fiercer opponent than Senator Cruz. Senator Cruz was adamant that the deal could, and under his leadership would – be reversed. “On day one I will tear this deal to shreds” is something Senator Cruz often says. Donald Trump on the other hand, despite being brash on all else, on this he has chosen to say that he will “police” the deal, meaning he’d preserve it.

Despite it being nine months since the Iran Deal was finalized, we have yet to see major business deals follow. The reason per European diplomats is “Ted Cruz.” Foreign businesses are especially fearful of a Ted Cruz presidency. They know Ted means what he says, and the Iran Deal would indeed be nullified on day one of his presidency.

Meanwhile, reacting to illegal Iranian ballistic missile launches, Trump was troubled by the fact that Iran is buying their missile technology from Russia and not the USA. Essentially, Trump would crazily like to trade with Iran, not only peaceful products, but even prohibited military offensive hardware and technology. Yet again, Donald and Ted could be no further apart.

We all want Obamacare repealed, but replacing it with socialized medicine – as Trump proposed, would be no improvement at all. We all want manufacturing jobs back in the states, but levying a tariff on products made in china will achieve only one of two things; higher prices for the American consumer, or killing those jobs altogether. American jobs left for a reason, and unless we fix the taxation and regulations behind their exodus, they don’t return. Senator Cruz will replace Obamacare with free market solutions, and will overhaul the tax and regulatory systems so that businesses ‘want’ to return, and can thrive here again.

Jewish families are burdened by the cost of Yeshiva schooling, and Senator Cruz understands the unfairness of it. Senator Cruz so often proclaims how “School choice is the civil rights issue of the 21st century.” With the approval of congress, Yeshiva tuition under Senator Cruz’s plan would be credited on every parent’s tax return. That would help parents, schools, and education as a whole.

Whether domestic or foreign policy, only one candidate truly understands what’s at stake, and how to go about it. Whether it’s Israel’s territorial sovereignty, or Iran’s revolutionary posture, Ted Cruz understands, and stands with our interests.

Come April 19th, remember what’s at stake, and don’t stay “neutral.” A vote for anyone besides Senator Cruz is a vote for Hillary Clinton and the Obama legacy. The choice is now, we either nominate Senator Cruz, or Obama’s legacy is here to stay. Regardless of the statewide results, each of our congressional districts will choose three unique delegates. Friends, choose wisely, choose Cruz!

« Weekly Living Torah Video: Inviting Your Non-Religious Child to the Seder
Documenting the Revolution in France »