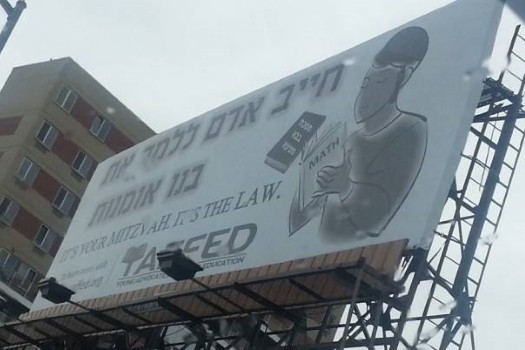 Writing for the New York Post, Crown Heights lawyer and activist Eli Federman and Jason Bedrick of the libertarian think tank The Cato Institute make the case that the efforts of activists petitioning the government to force Orthodox-Jewish schools to teach secular subjects are misguided, against the spirit of American religious liberty, and bound to fail:

A dispute over education within the Hasidic community made headlines this month after activists demanded the government force Hasidic schools to teach secular subjects.

Now the city Department of Education is investigating these schools — called yeshivas — and even threatening to send them “lesson plans.”

But like a man who steals his neighbor’s butter knife to cut down a tree, the activists are taking the wrong approach and using the wrong instrument.

Young Advocates for Fair Education and a former director of the New York Civil Liberties Union charge that Hasidic schools are failing to provide the legally required instruction in English, math, history and science. Although well-intentioned, using government coercion to achieve their goals violates parental rights and religious liberty — and is unlikely to work anyway.

The activists wrongly assume that being “educated” means whatever the government says it means. But there is and always has been a legitimate diversity of views about the meaning and purpose of education, what children should learn and how best to teach them.

Yeshivas have educational priorities that differ from mainstream society, but that doesn’t mean their students are uneducated. Most people would be impressed to hear that students were studying Aristotle and Plato in their original Greek and Virgil in his original Latin.

Yeshiva students spend most of their day studying the ancient Jewish texts in their original Hebrew and Aramaic. And like studying law or philosophy, vigorous Talmud study develops highly analytical and critical thinking skills.

A truly pluralistic society must allow individuals and groups considerable freedom to decide what to teach their own children.

Although the government may impose some reasonable regulations, particularly concerning health and safety, the justice system has long recognized parents’ fundamental right to decide how to raise their children. As the US Supreme Court ruled in its landmark case Pierce v. Society of Sisters, a “child is not the mere creature of the state.”

Some states do a better job adhering to this core American principle than New York. In Florida, for example, neither the state nor local districts “have the authority to oversee or control the curriculum or academic programs of private schools.” Private schools are free to decide what to teach and how to teach it, and parents are free to choose schools that work for them.

But even if the government had a right to impose its will on private schools, there’s no reason to believe it will be effective. In fact, the city DOE has proved utterly incapable of overseeing its own failing schools.

In some city schools, not a single student passed the state’s English or math exams. Although nearly 70 percent of city students graduate high school, barely a quarter are “college- or -career-ready” by the state’s own standards. Many of the students holding these worthless diplomas can barely read.

If the state and city governments fail to provide a quality education at their own schools, why should anyone believe that they’ll be able to improve someone else’s schools?

Plus, any effort to improve secular education in the yeshivas will need the support of the Hasidic community at large. Trying to twist their collective arm is a poor strategy for winning friends and influencing people. And their arm doesn’t twist so easily.

A prominent Hasidic writer has already voiced such resistance, calling Young Advocate’s plea for the DOE’s intervention an attempt “to disrupt and destroy” yeshiva education. Notably, the writer supports improving secular education in yeshivas, objecting only to government compulsion.

Lasting change can only come from within. Fortunately, there are some signs of progress. One Hasidic school in Crown Heights, Lamplighters Yeshiva, has already made great strides in implementing a quality secular education as a part of its curriculum — without DOE threats.

Better secular education in yeshivas is a worthy goal, but using persuasion, not coercion, is the right way to get there.

Jason Bedrick is a policy analyst at the Cato Institute’s Center for Educational Freedom. Eliyahu Federman writes on religion, culture and law.