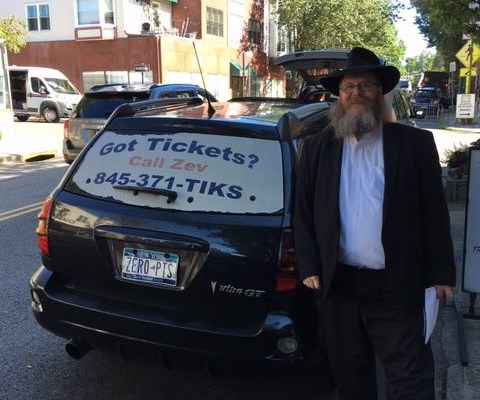 Attorney Zev Goldstein started the petition on Monday to call attention to the inequity in the way tickets are handled in the five boroughs. Photo: VIN News.

A Monsey lawyer is looking to change the way traffic violations are handled in New York City, with an online petition that he hopes will convince lawmakers to disband an administrative traffic court bureau that was created more than four decades ago.

Attorney Zev Goldstein, who has been specializing in traffic violations for than 25 years, started the petition on Monday to call attention to the inequity in the way tickets are handled in the five boroughs.

His son Hershel Goldstein explained that the Traffic Violations Bureau was originally created to handle the large volume of non-criminal traffic tickets which were creating backlogs in the criminal court system where they were being adjudicated at the time.

The TVB courts were staffed by administrative judges appointed by the Department of Motor Vehicles and gave those who were ticketed only the ability to plead guilty or not guilty, with no possibility of plea bargains or pleading to a lesser violation.

Over the years, however, counties in the state created traffic courts or moved their traffic violations back into the criminal courts, giving those who had been ticketed for a violation greater options, and until recently the TVB continued to operate only in New York City, Suffolk County, Buffalo and Rochester.

Suffolk and Buffalo closed their TVBs in 2013 and 2015 respectively and at the end of July Governor Andrew Cuomo announced that Rochester would shutter its TVB next spring as reported by WHEC, leaving New York City as the last frontier for the TVB.

There are numerous problems with the TVB model, explained Goldstein.

“In a regular court you call an attorney and you can fight the ticket,” Goldstein told VIN News.  “You can get a plea deal, get the points reduced and sometimes you can even get a small ticket down to just a parking ticket.  Because you can’t do that with the TVB, people play the push off game, because they feel like they have no opportunity to win because there are no pleas. You postpone the ticket enough times and hope the police officer doesn’t show up.  People keep pushing off those cases which actually creates a bigger backlog.”

Traffic courts throughout the state have been working efficiently and quickly, said Goldstein.

“The problem originally was that there was such a high volume of tickets that the courts didn’t know how to handle them but now there are a lot of traffic courts with multiple judges, multiple dockets and large courtrooms,” explained Goldstein.  “They get things done.”

The TVB model actually favors the courts, noted Goldstein.  Those who are issued a violation outside of New York City can ask for a supporting deposition to know what they are being ticketed for, giving them the opportunity to prepare for a trial.

“Here you have no time to prepare,” said Goldstein. “The officer doesn’t have to tell you what you did wrong.”

While in regular court the prosecution has to prove their point beyond reasonable doubt, the standard of proof in a TVB court is only “clear and convincing evidence.”

“So a police officer doesn’t have to say ‘I am certain it was that guy,’” observed Goldstein. “He can say ‘I think it was that guy’ and that is enough to find someone guilty.”

Being able to tip the scales in favor of law enforcement can yield significant financial windfalls, reported the New York Post.

An online petition to have Levine removed from his post describing him as “unjust, mechanical, and harsh,” garnered close to 1,500 signatures.  Eugene Kaushanskiy, who signed the petition in May, left a comment categorizing Levine as a “totally unprofessional judge who followed the $$ instead of following the law.”

Goldstein said that many attorneys in New York City are afraid to take on the TVB, concerned that doing so might hurt their chances in future court appearances and he hopes that the petition will demonstrate the public’s frustration to the state legislature and the City Council.

He sees abolishing the TVB as a win-win situation for everyone, because allowing plea bargains will move cases through faster and produce economic benefits that are being lost when tickets are pushed off indefinitely.  He believes that the biggest winners will be the residents of the five boroughs who will be able to realize greater justice when dealing with traffic violations.

“Right now, in New York City, you just don’t have a chance for a fair trial,” said Goldstein.

The online petition is here: https://www.change.org/p/new-york-change-traffic-courts-in-new-york-city-nyc-tvb.