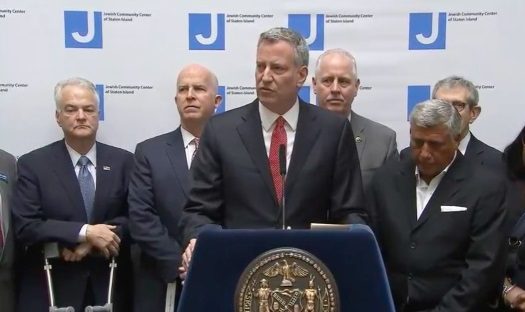 Standing in the lobby of one of several Jewish institutions in the New York City area that have been recently targeted with bomb threats, Mayor Bill de Blasio vowed to take a tough stand against bias crimes during a Tuesday morning press conference.

Flanked by high ranking members of the NYPD, elected officials and community and religious leaders at the Jewish Community Center of Staten Island , the mayor announced that five more religious institutions in New York City had been threatened just this morning.  de Blasio described the number of hate crimes reported in recent weeks as unprecedented.

“This is a moment in time, a moment in history, where forces of hate have been unleashed and it is exceedingly unsettling to people who are the victims of that hate, have that hate directed against them,” said de Blasio. “I want to say to all of my brothers and sisters in the Jewish community: New York City stands with you. The NYPD stands with you.  As your mayor, I stand with you.  We don’t take this lightly at all.”

The mayor acknowledged that for some, the threats may be particularly disturbing, evoking memories of pre-World War II Europe.

“People should be very concerned because we see historical patterns that are damning,” said de Blasio.

The mayor noted that both the city and the NYPD intend to be “not only vigilant but aggressive” in responding to any acts of hatred.

NYPD Commissioner James O’Neil reported that the incidence of hate crimes is up 113 percent in 2017, with 100 threats reported so far this calendar year, compared to just 47 reported during the same period last year. Of those 100 threats, 55 have been anti-Semitic in nature.

Rabbi Michael Miller, CEO of the Jewish Community Relations Council, noted while that federal security grants have been allocated to non-profit institutions for security enhancements, greater protection is needed and he called upon Congress to provide additional monies to address the issue.

The mayor urged city residents to report any imminent threats to the NYPD by calling 911 and any possibly suspicious activity by calling 311. de Blasio vowed that New York City would stand shoulder to shoulder in a united front against hate.

“We have to show that New York is a place where every faith is respected, where we don’t tolerate intolerance,” said de Blasio.