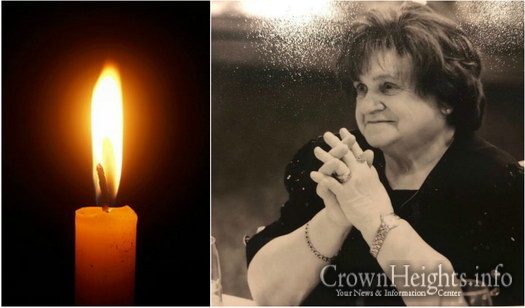 With great sadness we report the passing of Mrs Sarah Glick OBM, a Halocaust survivor and member of the Melbourne Jewish community. She passed away on Sunday the 23rd of Nissan, 5779.

Sarah Glick was born in 1927, the oldest child of Boruch and Zissel Baila Szwartsman.

Her childhood was cut short when her community was rounded in the ghettos. There Sarah witnessed the selection; the last image she had of her parents and siblings was them being sent on the line to Auschwitz, never to come home again. Alone, Sarah was sent from labor camp to labor camp.

While searching for family after the war, Sarah met her future husband, Mendel Glick obm, who was doing the same.

Together, the couple began to leave the broken pieces of their war-year horrors behind and build a new life. Sarah and Mendel’s wedding was among the first in post-war Trzebinia; at the time of Mr. Glick’s death in 2017, the couple had been at each other’s sides for 72 years.

In 1949 the young arrived on the shores of Australia without a grasp of the local language or any means to support themselves.

As new immigrants, Sarah and Mendel worked hard, often eighteen hours a day, to provide for their growing family In 1966, Mendel and Sarah used their savings to purchase a bakery. They started with a small shop and no experience, and from ground up, they built Glicks Bakery into the proud Australian name that it now is.

In the early years of the shop, Mrs. Glick joined her husband long before the sun rose. She would set out the freshly-baked goods, serve the customers, and provide whatever support her husband needed to keep the store running.

She raised her nine children with virtues of hard work and generosity. Even though she owned a bakery, she still made her own challah and cakes for Shabbos each week. And among everything going on in her life, she would leave a bowl of milk on the porch for the stray cat, send food to poor people, and quietly support those in need. Despite the horrors she lived through, she emerged from the shocking experiences with a soft empathy, an incredible sense of humor, and deep wisdom.

The Levaya was held on Tuesday in Melbourne.

Her life continues on with the five generations whom she merited to raise—and through the universal messages of resilience, humility, and kindness that she taught.