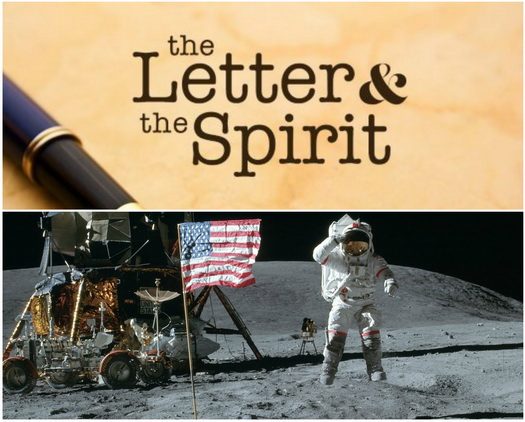 As today is the 5oth anniversary of the first man landing on the moon we present a letter of the Rebbe in connection with space travel and exploration. The letter, written originally in English, is from the archives of the Rebbe’s trusted secretary Rabbi Nissan Mindel.

I received your letter in which you write about the apparent contradiction between the latest scientific attempts to penetrate outer space, especially the efforts to place a man on the moon, which seems to you to contradict the statement in the Torah “the heavens belong to G-d, and the earth He gave to the children of man.”
Actually there is no contradiction at all, if you consider the term “earth” not in the narrow sense referring only to our globe, but in its proper sense, as meant in this verse, which includes also the atmosphere and the whole physical universe, with which mankind is concerned and directly affected by. We must not confuse the terms “Heaven” and the “”planets”. The stars, planets, moon, etc. are not called “Heaven”, since “Heaven” is something spiritual, whereas those planets are physical and belong in the physical universe.
The fact that G-d created the so-called heavenly bodies to serve our world, and to give light, warmth, and energy to it, and placed them in the firmament of the sky at a certain distance from our earth, does not preclude man’s attempt to learn all about them. Similarly, when the Torah states that G-d placed the moon in the sky to give light on earth, this does not exclude the possibility of man’s landing on it at some future time. The meaning of the verse “the Heavens belong to G-d,” etc., is in the sense that while G-d is everywhere, including the Heavens, man was placed in the physical universe, and is part of it, and, therefore, must make the most of it, as long as there is life on this earth. There is nothing in actual scientific experiments and accomplishments that contradict the Torah, nor is there such a possibility since the Torah is Truth, while science does not claim absolute certainty.
Judging by your writing and background, I firmly hope that you are conducting your daily life in strict accordance with the Torah, which is called Toras Chayim, the Law of Life, and the mitzvot whereby Jews live, and that you attempt to make steady advancement along this road, in compliance with the principle that “All things of Holiness should be on the upgrade.”
With blessing,