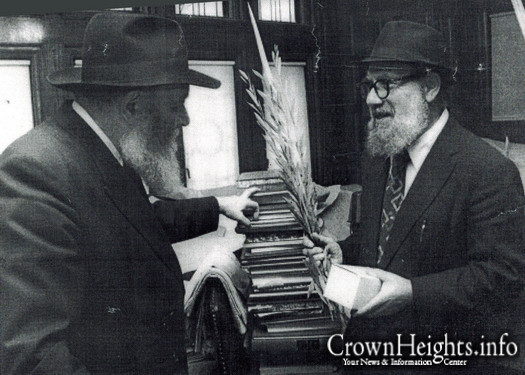 This Week, we present an excerpt from the writings of the Rebbe’s trusted secretary Rabbi Nissan Mindel explaining the deeper significance of the joyous celebration of Simchas Beis Hashoeva on Sukkos, as well as Shmini Atzeres and Simchas Torah.

The essay is from a forthcoming book by Nissan Mindel Publications on the philosophy of Chabad, based on Torah Or and Likutei Torah.

The joy of Succoth found the highest expression at the Simchath Beth Hashoevah, the Water Drawing Ceremony, when water was drawn from the Siloam spring for libation on the Altar of  the  Beth  Hamikdosh on each of the seven days of Succoth. This joyous ceremony is not even mentioned in the Bible; it is a Rabbinic enactment which has to do with the fact  that,  according to the Sages, this was the season when the world was judged by G-d in the matter of rain (hence the prayer for Rain –Geshem– on Shemini Atzereth).Accordingly, whereas all year round there was daily wine libation (nisuch hayayin)  on  the  altar,  on  Succoth  there  was  also  water

libation  (nisuch hamayim) throughout the seven days of the festival.

Here was a ceremony which by its very nature was a highly mystical one. Considerable attention to the significance of this custom and ceremony is given in RSZ’s discourses  on Succoth.

The discussion begins on the relative aspects of wine and water, and their significance as religious symbols.

Of wine it is written that “it rejoices G-d and men.” Wine has the stimulating effect of evoking a feeling of  elation and joy. Its spiritual counterpart is the stimulation derived from the study of the Torah. Indeed, wine is the symbol of Torah, as we find in the Midrashic commentary on the verse, “Thy love is sweeter than wine,” which the Rabbis interpret to mean, “The words of the Scribes are sweeter than the wine of Torah.” Thus, the daily wine libation on the altar in the Beth Hamikdosh symbolized the joy of Torah study which should be experienced all year round. Inasmuch as the festivals call for a greater measure of joy, more intensive study of Torah during the festivals would be indicated.

Discussing the emotion of joy, RSZ points out that it is a feeling which might sometimes be contained within a person, and sometimes not. A person may feel happy inwardly, without visible signs of it. On the other hand, there are times when the feeling is so intense that it cannot be restrained, and the person is impelled to sing for joy, or dance for joy. Similarly with the spiritual kind of joy. A person praying, or performing a Divine precept, or studying the Torah, may experience an inner elation from a sense of nearness to G-d. Throughout the year this feeling is within bounds. But on Succoth this feeling reaches ecstatic heights

of exultation and is expressed in singing and dancing. This feeling became especially manifest during the ceremony of the Water Drawing and libation during Succoth, the water itself being the symbol of it.

Water unlike wine, is in itself tasteless and odorless. However, when one is acutely thirsty, there is nothing more delicious and refreshing than water, especially spring water. For this reason, the Halachah requires a person to make a benediction over water only when drinking it to quench his thirst, whereas one must always make a Brachah on wine. In Kabbaliscic terms “wine” is identified with binah (“understanding,”) since real pleasure begins with comprehension.

Water, however, is identified with chochmah (“wisdom”), which is the source of understanding, hence “above” it, as has been defined elsewhere. Since comprehension is necessarily limited, the joy derived from it is also necessarily limited. But chochmah, the source of binah, is essentially unlimited, or at any rate, less limited  than binah, for chochmah emanates from the En Sof.

Now, the avodah (Divine service, in terms of repentance of Rosh Hashanah and Yom Kippur) creates a tremendous thirst for G-dliness which transcends comprehension,  and  it is sated by the extraordinary spiritual gratification on Succoth, through the special Mitzvot of  Succah  and  the Four Kinds (Lulav, etc.). The worshipper attains the height of spiritual intoxication, as it were, a state induced by the “wellspring of living water,” of chochmah, by far more  inspiring then the “wine” of binah. Consequently, while the other festivals are seasons of limited rejoicing, Succoth is the Season of Rejoicing par excellence, when the joyous exultation can no longer be confined inwardly, but bursts forth into an ecstatic emotion pervading one’s entire being and inducing the outer manifestations of dancing, hand clapping and finger clicking which accompanied the ceremony of the water drawing and libation as described by the Sages of the Talmud.

In the light of this mystical interpretation of the  festival of Succoth and its symbols, the concept of the “Festival of gathering” also assumes a mystical dimension. It is no longer understood in the sense of the ingathering of the last crops and fruits of the summer season, but rather in a spiritual sense: the reaping and ingathering of the spiritual rewards following the devotion and repentance during Rosh Hashanah and Yom Kippur and the Ten Days of Teshuvah in general.

The culmination of the rejoicing is reached on the eighth day, Shemini Atz.ereth.  RSZ interprets the term Atzereth as derived from the Hebrew verb atzor, to retain, or detain. On this day the Jew absorbs not only the accumulation of the spiritual rewards of the previous days of Succoth, but also inspiration of a higher order. RSZ puts it this way:

If the mutual love between Israel and G-d which is heightened during the seven days  of  Succoth  is expressed  by the symbol of “embrace,” as it is written, “And His right hand embraces me,”  the closeness attained on Shemini Atzereth is described in terms of “kisses,” as is written, “He kisses me of the  kisses  of   His mouth.  This refers  to the union of chabad (chochmah, binah, daath) with chabad; the chabad of the created  being  with  the  chabad  of  Divine  revelation, which is  the reason why this day is associated with the celebration of Simchath Torah, Rejoicing with the Torah.