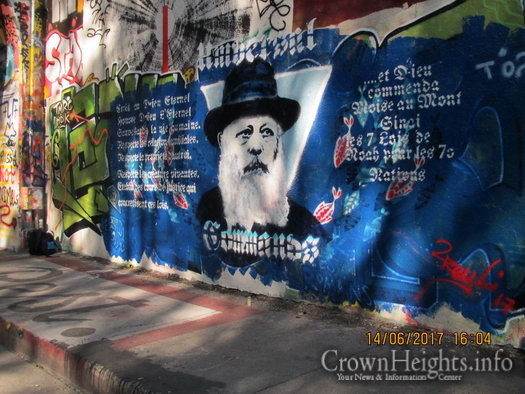 From the Canadian Jewish News by Janice Arnold:

The vivid blue mural with swimming fish on the side of a duplex at the corner of Victoria and Kent avenues in Montreal has been attracting attention for months. It’s obviously the creation of a professional – but who?

Passersby in this multicultural neighbourhood probably appreciate how the painting, which measures about 30 m by 3 m, has transformed the brick wall that borders a parking lot.

Only the members of the surrounding Lubavitch community likely recognize the elderly bearded man at the centre – its the late Rebbe Menachem Schneerson.

They also understand what the writing is all about: written in French are the seven laws of Noah that, according to the Talmud, are basic commandments for a righteous life. They are believed to be binding on “the children of Noah” – in other words, all of humanity.

Similar murals have appeared in the past year in Outremont and downtown, near the Quartier des Spectacles.

With a little sleuthing, The CJN was able to track down the artist. Although he keeps a low profile, he was eager to talk about his work and his mission.

Michael Israily – a.k.a., Zreyli – is a Lubavitcher, but he made it clear that he is making this street art at his own initiative and expense. He admits that some members of the community are hesitant about his method of spreading the Noahide imperatives, but no one has stopped him.

The father of 10 gave up working as a sofer (scribe) three years ago, to devote himself totally to art – specifically, street art.

The Noahide laws, in the version used by Zreyli, mandate belief in one God, respect for human and animal life, family values, honesty and the establishment of courts “that enforce these laws.”

A modest man who it would be hard to characterize as preachy or judgemental, Zreyli said his goal is simply to spread this “covenant that God made with Noah for his children forever.” He believes that racism would end if everyone adhered to the laws.