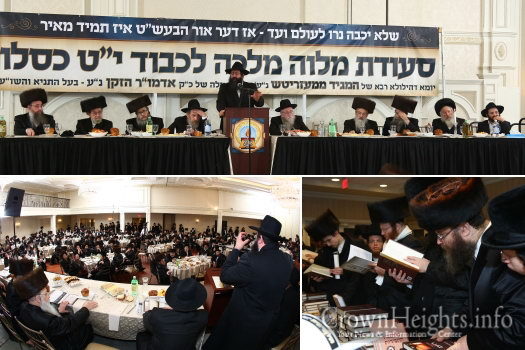 The Melava Malka was attended by prominent Rabbonim and drew a diverse crowd of Hundreds of people, representing the entire spectrum of Yidden, all in their yearning and appreciation in this turbulent era, for Avodas Hashem as it is illuminated via Chassidus.

The program was organized by its director, R’ Dovid Oberlander, son of its founder and Rov Rabbi Gedalia Oberlander. Rabbi Aaron Dovid Gancz shared some opening remarks and chaired the rest of the evening, followed by noted Rosh Yeshiva and Mashpia Harav Hachossid Rav Leima Wilhelm, who also gives a weekly shiur in Heichal Menachem. The peak of the event, were the riveting and thought provoking Divrei Hisorerus presented by the world renowned Rosh Yeshiva of Ohr Elchanan – Chabad, Los Angeles, Rabbi Ezra Schochet, elaborating on the importance of Learning Chassidus.

As in the past, hundreds flocked to buy Chassidishe Sforim, drastically reduced for this unique occasion, especially those of the Maggid and the Alter Rebbe. as well as the brand new volume of Chassidus Mevueres – Tanya. “Chaim Shel Simcha,” a collection of the teachings of the Frierdike Rebbe and The Rebbe Zy”a, on how to serve Hashem with true Simcha.

Throughout, the evening was enhanced with various Chassidishe niggunim, by the Rabin brothers, inspiring and lingering on as the evening concluded in spontaneous dance late into the night followed by a Chassidishe farbrengen.