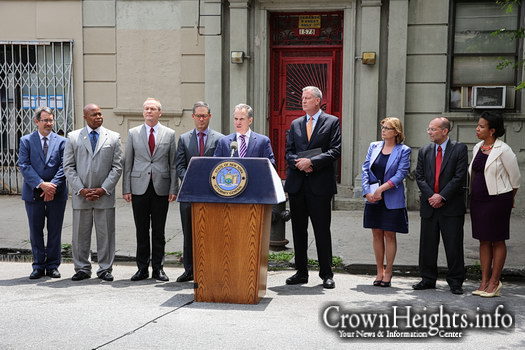 In the first ever such criminal investigation pursued by the State of New York, an Orthodox-Jewish Crown Heights landlord was convicted of “harassing” his tenants by failing to consistently provide them with heat and hot water, and by performing unsanctioned renovations to the building. He faces up to a year in jail.

New York Attorney General Eric Schneiderman announced the guilty verdict of Crown Heights landlord Daniel Melamed, and the corporation that he controlled, on three counts of Unlawful Eviction of rent stabilized tenants. Melamed will be sentenced on September 13, 2017.

Mr. Melamed was arrested in June of 2016, and more charges were tacked on in November.

The following is a press-release from the Attorney General’s office:

The guilty verdict follows a months-long investigation into Melamed’s ownership and management of an apartment building at 1578 Union Street, where the Attorney General found evidence that Melamed used construction and deprivation of services in an attempt to get rent stabilized tenants to give up their apartments. Melamed’s June 2015 arrest was the first resulting from the Tenant Harassment Prevention Task Force, a collaboration between State and City agencies announced by Attorney General Schneiderman, Mayor de Blasio, and Governor Cuomo in February 2015.

“We won’t hesitate to bring the full force of the law against anyone who harasses, intimidates, and jeopardizes the health and safety of tenants,” said Attorney General Schneiderman. “Daniel Melamed intentionally endangered rent-stabilized tenants in order to push them out – and line his own pockets. Today’s guilty verdict marks another win for our Tenant Harassment Task Force and the strong partnership we’ve created between the state and the city to hold bad landlords accountable.”

New York State Homes and Community Renewal Commissioner RuthAnne Visnauskas said, “Today’s Melamed verdict is the result of the strong partnership between the state, the Attorney General, and city to hold bad landlords accountable for breaking the law. In the five years since the Governor’s Tenant Protection Unit was created, it has made numerous criminal referrals of landlords that have led to convictions and jail, negotiated multi-million dollar settlements, returned 60,000 units to regulation, and recovered more than $4 million in overcharges to tenants. Unscrupulous landlords will not be able to hide wrongdoing from the Tenant Protection Unit and their partners in law enforcement, and working together they are not going to allow vulnerable tenants to be harassed and preyed upon.”

NYC Housing Preservation and Development Commissioner Maria Torres-Springer said, “Today’s verdict is a victory for all those who champion fair housing and responsible ownership. This is a clear message that we will not stand idly by and allow landlords to take advantage of their residents. I want to thank my staff for their continued work for tenants on a daily basis. I want to applaud Attorney General Schneiderman for his dedication to the residents of New York City. We look forward to our continued collaboration as we do everything in our power to fight on behalf of tenants across our city.”

“Mr. Melamed was the first landlord indicted by our Tenant Harassment Task Force – a distinction he richly earned by tearing apart his own building to force out a family with a young child. Other landlords who put money ahead of people’s lives should take warning: we will not tolerate tenant abuse in New York City. I thank the Attorney General, our agency partners at HPD and DHCR, the office of the Buildings Marshal, and DOB staff for their great work in securing today’s verdict,” said City Buildings Commissioner Rick D. Chandler, PE.

Prosecutors from the A.G.’s office proved that Melamed presided over a disturbing pattern of dangerous and unlawful construction that jeopardized the health and safety of building tenants with the intent of evicting the remaining rent stabilized tenants. The evidence presented at trial showed that Melamed illegally shut off heat to rent regulated tenants, even when temperatures dropped below freezing; repeatedly exposed tenants to lead dust that exceeded acceptable levels by as much as eighty-eight times the permissible threshold; and removed the boiler in the middle of winter from the building without permission from any City or State agencies.

As proven at trial, almost immediately after buying the building, Melamed embarked on a campaign to rid it of rent stabilized tenants by cutting essential services such as heat, performing illegal construction and failing to contain and clean toxic lead dust.  The three remaining tenants testified against their landlord and detailed how they adapted to life under his ownership, including using ovens to heat their apartments, bathing using buckets, and covering their noses and mouths to protect themselves against the lead dust.  This trial exposed the lengths that Melamed went to force these tenants to leave their rent stabilized apartments.

After taking part in a joint task force inspection of 1578 Union Street in Brooklyn and observing the extremely troubling conditions, such as a lack of heat and hot water, exposed friable asbestos in the basement, and a thick layer of dust that was present throughout the building, the TPU conducted tenant interviews and reviewed various records and then formally made a criminal referral to the Attorney General.

The case was prosecuted by the Attorney General’s Real Estate Enforcement Unit, which is headed by Special Counsel to the Criminal Justice Division, John Spagna, with Assistant Attorney General Brian McDonald, under the supervision of Public Integrity Bureau Chief Daniel Cort and Deputy Bureau Chief Stacy Aronowitz.  Legal Support Analyst Allen George assisted in the prosecution of this case.