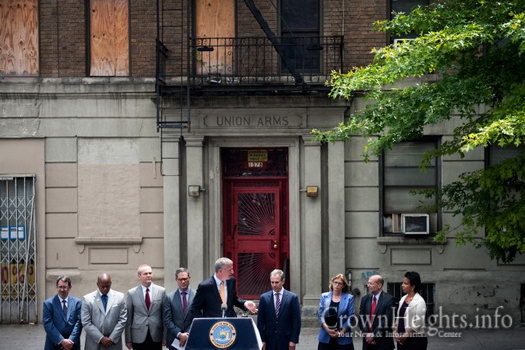 Mayor Bill de Blasio Hosts a Press Conference with Attorney General Eric Schneiderman on the corner of Union Street and Troy Avenue to announce the arrest of Melamed, on June 17, 2015.

New charges have been filed by State Attorney General Eric Schneiderman against Crown Heights landlord Daniel Melamed, who is accused of ‘Illegal eviction’ for not providing adequate heating to his tenants in an alleged bid to drive them out.

A New York City landlord charged with shutting off heat to drive out tenants now also faces allegations of mortgage fraud and larceny.

Melamed has pleaded not guilty to all the allegations. His lawyer hasn’t immediately responded to a request for comment on the new charges, but the attorney has described the earlier unlawful-eviction case as “political grandstanding.”