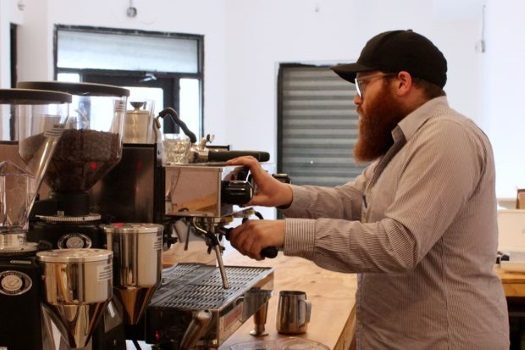 Zalmy Mochkin, proprietor of the Dean Street Cafe, makes and espresso for a friend at his new cafe at 87 Utica Ave. in Crown Heights. Photo: DNAinfo/Rachel Holliday Smith.

Until recently, Zalmy Mochkin had no specific experience as a coffee roaster. But for years he’s been tasting great coffee anywhere he can find it, from San Francisco (where he visited the original Blue Bottle Coffee with his brother) to the Australian outback, where he swears he found a perfect cup while road-tripping to Perth.

Now, the entrepreneur — who has worked a lot of jobs, from a restaurant in Israel to a phone answering company he ran in Long Island — is getting into the coffee business by opening his own place, Dean Street Cafe at 87 Utica Ave., stocked with his own brand of coffee, Crown Heights Roasting Company, a business begun a year and a half ago with a dream and a national Craigslist search.

“I found a small-batch, five pound roasting machine in Minnesota. And I bought it and paid for the guy to drive it down here and that’s how we began,” Mochkin says inside his new cafe, which will open for business on Monday.

The focus at the new 25-seat eatery will definitely be coffee — single-origin, all kosher and fully caffeinated (or, put plainly: “death before decaf,” Mochkin says) — but will also have snacks like pastries, grilled cheese and avocado toast on the menu to start.

In a few weeks, once a full kitchen is completed in the basement, Dean Street Cafe will also serve more hefty dishes like rice bowls, Portobello mushroom burgers and poached eggs with salmon, he said.

The move to food service makes sense for Mochkin, whose first job was working at a kosher pizza place run by his father on Montgomery Street and Troy Avenue for 13 years.

“I really grew up in the back of a kitchen,” he says.

That pizza shop, The Kretchme, was named for a word meaning an inn, gathering place or “safe haven for peace and quiet,” he said, the sentiment of which Mochkin hopes to bring to his new cafe.

“Coffee’s supposed to bring people together,” he said. “This place will attract people who want to sit down for a while.”

Dean Street Cafe is located at 87 Utica Ave. at the corner of Dean Street.