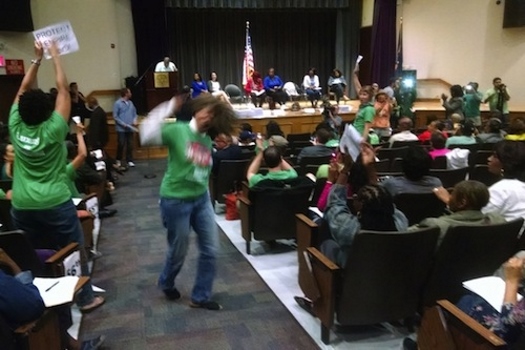 The monthly meeting of Community Board 9 at Medgar Evers College in Crown Heights turned hostile Tuesday night, when critics of a controversial plan to rezone Empire Blvd. showed up en masse and loudly demanded that the board rescind its request for a study of the move.

Dozens of members of the local anti-developer group, Movement to Protect the People, filled an auditorium for Community Board 9’s full board meeting and demanded the board yank its yes vote in favor of exploring rezoning in the area. Things got so confusing and hostile that there were multiple calls for NYPD officers to calm the crowd

“Rescind! Rescind! Rescind! Everything should stop!” Geoffrey A. Davis, Crown Heights’s newly elected district leader, shouted at the hearing at Medgar Evers College, shortly before officers from the 71st Precinct were called into the room in one of many such interventions by police to the three-hour meeting.

Opponents of rezoning fear it might open the door for developers to swoop in and build high-rise residential towers, while supporters hope rezoning would better protect residents from overdevelopment and pave the way for adding affordable housing to the neighborhood.