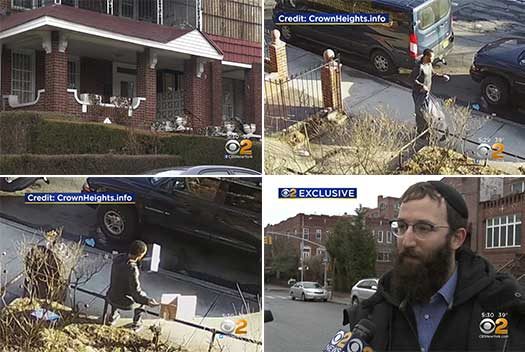 A brazen thief, who was captured on surveillance video stealing packages and opening them before deciding to take the items, caught the attention of CBS News after being posted here on CrownHeights.info.

An alleged picky package thief was caught on camera in Brooklyn.

Police say in one case, the man can be seen opening a package right in front of a home, checking its contents and only taking some of the items.

Surveillance video posted on CrownHeights.info shows the suspect casually strolling up the steps of a home near Montgomery Street and New York Avenues in the middle of afternoon last Sunday.

“Sits down to the front wall of my yard, and he’s opening it up and checking out what’s inside,” victim Ben Lifshitz told CBS2’s Marc Liverman in an exclusive interview.

“It’s infuriating,” he added. “Guy walks up to the porch, hops up the stairs going two steps at a time, not a care in the world.”

Lifshitz said he the first sign of the alleged thief came when he returned home with his kids Sunday afternoon.

“When I came home, I noticed that a couple of boxes were open and scattered in the front yard,” he said. “I checked the cameras, and I see this shocking scene unfold right in front of my house.”

Lifshitz said the suspect got away with a pair of shoes and makeup, then headed straight down Montgomery toward New York Avenue.

It happened less than a block away from a police station, but he doesn’t think the man was too concerned about something like that.

“This was particularly brazen — the way he just sat down and inspected the packages right there. That’s what gets me,” he said. “If you want to steal a package and run off with the box into a car and flee, that’s one thing. But this guy parked himself there, checking the goodies out.”

He never even looked up at the cameras.

“Who knows what kind of guy this guy is? He could easily feel threatened and do something worse,” said Lifshitz.

Which is why he wants the suspect caught.

In the surveillance video, the man can be seen carrying a large garbage bag. Lifshitz thinks it was full of other people’s packages.

Police said, so far, no one else in the neighborhood has filed a report.

According to NYPD crime statistic, petit larceny crimes are up nearly 10 percent year-to-date in the precinct where this happened.