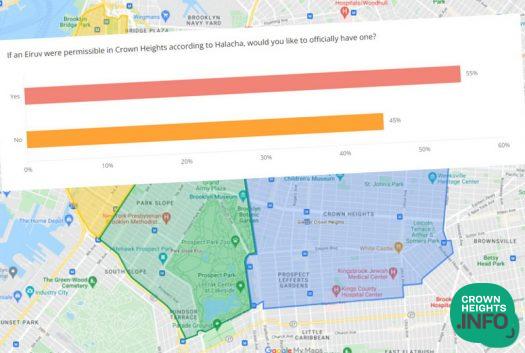 POLL: A Majority of People Want A Crown Heights Eiruv, But Not An Overwhelming Majority

The results of a survey asking residents of Crown Heights if they would want an official Eiruv for the community has arrived, and it shows that a majority are in favor, but not by much.

The question was, “If an Eiruv were permissible in Crown Heights according to Halacha, would you like to officially have one?”

According to the survey, which was completed by hundreds of residents, 55% responded YES, that they would be in favor, while 45% responded NO.

The argument for or against an Eiruv for the Crown Heights community stems from two sticky subjects. 1. Is it Halachically permissible, and 2. Did the Rebbe want or not want one?

The Halachic aspect of erecting an Eiruv for Crown Heights has been a hotly debated topic, primarily focusing on Eastern Parkway and the concern that it may be considered a Reshus Harabim and unable to be encompassed by an Eiruv. This debate, and others, can be found in Kol Koreh‘s, Kovtzim, and letters that have been published and made available to the public.

The second issue, that of if the Rebbe wanted an Eiruv, remains a less divisive subject. While the Rebbe did encourage many communities and cities to erect their own Eiruvs, the Rebbe was reported as having spoken with Rabbi Groner and others against a Crown Heights Eiruv.

As such, even though there is presently an Eiruv built that encompasses Crown Heights, no Crown Heights Rav has yet endorsed it for the community.