« 7:30pm: Inside the World’s Most Successful Jewish Movement
Chabad of Bedford To Break Ground on Six Million Dollar Building » 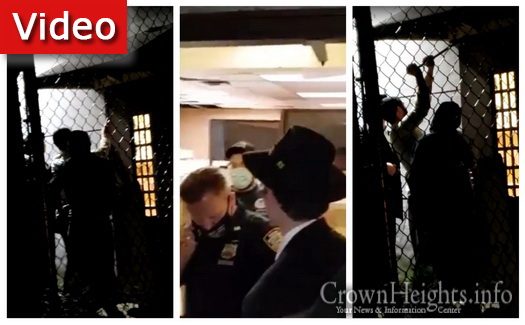 A group of bochurim who seem unable to stay out of trouble were caught again this week as they broke into the back door of 770.

The group was caught on cell phone camera footage as they attempted to gain entry, using a crowbar to force the door open.

The police were called, but no arrests were made.

770 has only recently reopened for Minyonim on a restricted basis, allowing only ten men inside at a time. The entire building has been closed since New York State ordered all houses of worship to close over fears of spreading the COVID-19 virus.

The group made headlines after one of them gained entry to 770 in Mid April, resulting in one arrested for trespassing and two others for assault.

Another incident took place under two weeks ago, when two of the bochurim decided they did not like where the bima in the courtyard of 770 was located. The Bochurim forcibly moved the bima as a krias hatorah was taking place, nearly dropping the Sefer Torah to the floor.

« 7:30pm: Inside the World’s Most Successful Jewish Movement
Chabad of Bedford To Break Ground on Six Million Dollar Building »