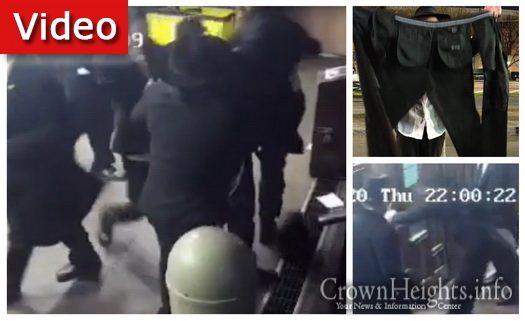 It’s beyond laughable. As the community continues to report tragedy after tragedy – all while keeping to the guidelines put in place by the government and Rabbonim – a group of bochurim were arrested after one broke into 770 while it was closed to slow the spread of the deadly COVID-19 virus.

With police lights flashing in the background, the bochurim were caught on camera at 10:00pm Thursday night, attempting to force the door to downstairs 770. The incident was made worse by the fact that when one person attempted to stop them, they ganged up, throwing punches and attacking him.

The incident allegedly took place after one of these bochurims friends was caught by the 770 caretakers inside the building, having been let in with an unauthorized key, according to the police.

According to the bochurim, a scuffle ensued inside 770, and they were attempting to gain entry to assist their friend.

Despite their best efforts, including a crowbar, the door remained secured.

According to the 71st precinct, three bochurim were arrested, two outside 770 for assault and one inside for trespassing.

This group of bochurim are part of a segment of bochurim who have continued flout the rules put in place for Crown Heights after 770 and all yeshivos were shut down a month ago.

On a phone call with CrownHeights.info, a spokesman for the group claimed that the bochurim had legitimate rights to enter the building, saying the Hanholas HaYeshiva did not close the Beis Medrosh, and the bochur had gained entry legally.

The 71st Precinct has reminded the community continually that the shutting of 770 and ban on large gatherings will be enforced, and arrests made for those who do not comply.

While most bochurim returned home after all schools were closed, and those that remained maintained social distancing rules, these bochurim have continued to flout the guidelines, holding Minyanim outside 770 and sparking altercations with the police.

Until now, CrownHeights.info had elected to not report such incidents of a minority few, but when the incident rises to the level of arrests and public perception of Crown Heights, it is worthy of condemnation.