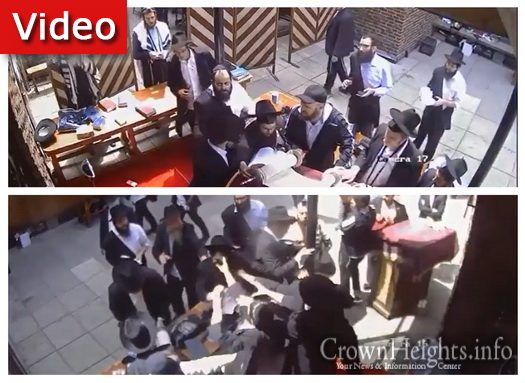 A Kriah in the courtyard of 770 became the center of a scuffle Monday afternoon, after “terrorist” bochurim took affront at the location of the bima. The bima had been placed by “the Rebbe’s place,” and the bochurim felt that this was grounds for violence.

Two bochurim entered the minyan 2:25pm Monday afternoon as they were about to begin an aliya, and began forcibly pushing away the bima with the open Sefer Torah on it. The Sefer Torah nearly dropped to the floor, and as those at the Minyan protested, they became targets of the “Terrorists.”

A third “terrorist” bochur entered the melee as a father managed to pull his child away just before the fists began to fly.

The fight had to be separated by force, and Hatzalah was called after the incident to treat those injured in the scuffle.

One of the “terrorist” bochurim involved in yesterdays fight had attacked another bochur in front of 770 with a crate this past Tishrei, leaving him bloodied and in need of medical attention.