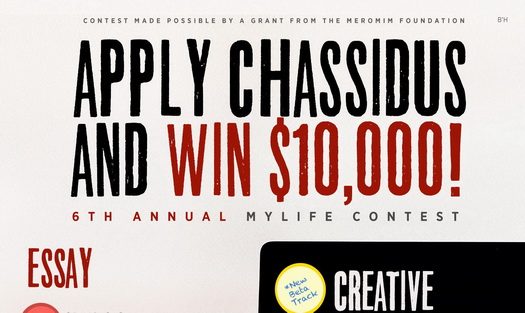 The mood is festive at the Meaningful Life Center this week. As the team prepares to launch its 6th annual MyLife: Chassidus Applied Essay Contest, a fresh unveiling is in the works. The original essay competition challenging applicants to address a practical life issue using the teachings of Chassidus will this year be joined by the new “MyLife Creative” track. The beta track invites contestants to submit an artistic rendering of a Chassidic idea for the chance to win $1,000.

In the six years since the contest’s inception, thousands of applicants have submitted essays translating the teachings of Chassidus into real-life solutions. Funded in part by the Meromim Foundation, the contest and its $10,000 first prize serve as motivation for young and old to share the answers Chassidus holds to universal questions: How do we make the right choices? How can we grow through our fears? How can we stand up to social pressure? Why are we here?

This year, the contest breaks new ground. The MyLife Creative track welcomes artists and musicians, videographers and podcasters, writers of poetry and of prose and creatives of all stripes to showcase Chassidus using imagination and their medium of choice. This track of the competition seeks experiential representations of Chassidic ideas for a winning prize of $1,000. “We want to see people apply Chassidus in new, creative ways,” explains contest Director Rabbi Mendy Tubul animatedly. “We’re hoping to see a lot of originality in these presentations.”

But the new track brings with it its own set of challenges. “With such a wide variety of submissions, we needed to make sure entries could be judged on a scale without compromising their individual and creative nature,” Rabbi Tubul says. “We also needed to be certain we were doing our best to preserve the integrity of Chassidus and its application to life.” In addition to the panel of venerated scholars commissioned to judge the essays, a separate assemblage has been hand-selected to appraise the MyLife: Creative submissions. The contest guidelines, too, have been carefully constructed to encourage innovation and expression while establishing clear criteria for entrants to follow. “It’s a new venture,” he affirms, nodding. “We’re excited to see where it goes.”

Feedback from previous years has been overwhelmingly positive as many contestants testify to the transformative impact the contest has had on their lives. In a letter to Rabbi Simon Jacobson, Dean of the Meaningful Life Center, one mother writes that her high-school-aged daughter had been “in somewhat of a slump in her Yiddishkeit” when the contest launched. “Encouraged by her teachers, Esther (not her actual name) took up the challenge and entered the student competition. As she wrote, her questions crystallized; as she studied, answers began to appear within reach. Working on her essay empowered Esther with a new level of confidence. Esther began to realize that perhaps her newfound insight could help others with similar struggles find the clarity she had once so desperately craved.”

Rabbi Jacobson calls Chassidus “the world’s best-kept secret”, and explains that the contest is a way of bringing its powerful relevance to life. “The competition’s latest extension will hopefully broaden our work of Yofutzu Ma’ayonosecha Chutzah, expanding the reach of Chassidus to new horizons. Using creative expression to apply Chassidus allows its ideas to touch people in a deeply personal and visceral way,” says the rabbi.

Rabbi Jacobson reminds us that in this contest, in every track, everyone is a winner. “If you spend time thinking about an idea in Chassidus and applying it to your life, either as a written essay or in a creative way, you’ve won something much more profound and long-lasting than $10,000.” The monetary prize is just an incentive, he says – it is the teachings themselves that are the real trophy.