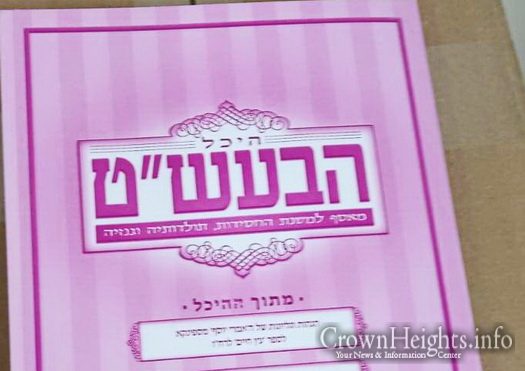 The well-known Torah journal, under the expert guidance of chief editor Rabbi Nochum Greenwald of Lakewood, NJ, has arrived in stores and Heichal Menachem centers just a week before Chai Elul, the birthday of the “Two Great Luminaries,” the Baal Shem Tov and the Alter Rebbe.

This thirty-ninth issue contains a superb collection of articles related to Toras Hachassidus and Darkei Hachassidus, written by the finest thinkers and teachers of Chassidus. Alongside these in-depth articles come fascinating historical reviews about the beginnings of Chassidus, its leaders and publications.

The column known as Miginzei Haheichal contains handwritten edits to the Sefer “Etz Chayim” of the Imrei Yosef of Spinka, in the author’s personal handwriting. In the Or B’heichal column, Rabbi Nochum Greenwald discusses the Alter Rebbe’s view on the potential evil side of kano’us. Another article is “Gentile melodies and their transformation to Kedusha, according to the Torah of the Baal Shem Tov and his students.”

The column of Igros Hatzaddikim contains letters and talks in the handwriting of the Magen Avos of Kapust, and also a lengthy and fascinating correspondence from the Minchas Elazar regarding the shidduch of the late world-renowned posek, Rabbi Shmuel Wosner (author of Shevet Halevi). In Darkei Hachassidim, Rabbi Chaim Rappaport writes about the Halachic implications of rain in the sukkah, and Rabbi Boruch Oberlander writes about the tradition to use an Esrog from Calabria, based on the writings of the Rebbe Rashab (including several never-before published letters).

The column of Eileh Toldos brings us a biography written by one of the late writers of the journal, Rabbi Yehoshua Mundshaine, describing the life of Reb Aryeh Leib Zivav, one of the foremost students of the Tzemach Tzedek, and a follow-on article by Rabbi Mendy Kastel who helped and assisted with the publication of the article. Another article was written by Rabbi Yisrael Alter Gruvais: a biography of Reb Bentzion Rabinovitch of Ostrovah, a renowned Chossid of Kotzk and Ger.

In Mishulchan Hasforim we find an overview called “Truth and fiction about the meeting of the Tzemach Tzedek and the Aruch Hashulchan,” written by Rabbi Menachem Gelernter, as well as a fascinating article by Rabbi Eliyahu Matusof about the forgery of the Mitteler Rebbe’s approval for the second printing of the Alter Rebbe’s Shulchan Aruch.

The readership too, including many distinguished rabbis and Talmidei Chachomim, have participated in this edition in the form of letters to the editor.

The issue is available in stores and Heichal Menachems.