« Weekly Unique Photo of the Rebbe
Hey Teves in Paris » 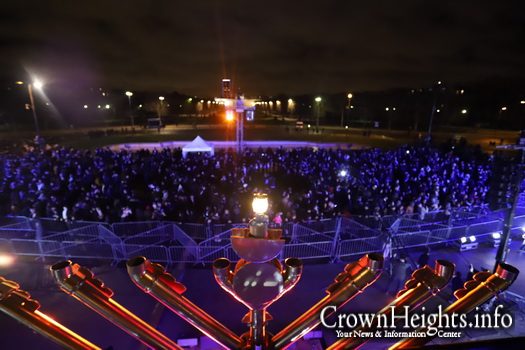 Although Chanukah has concluded for this year, our sages inform us that the lights of Chanukah will never be extinguished. In the following story, which I heard this past Shabbos at Rabbi N. Mangels’ weekly Shabbos farbrengen in ksav sofer,  we see how they have a power to illuminate one’s life in a most meaningful and impactful way.

Rabbi Mangel related, that some years ago a shliach confided to him that while he makes a public menorah lighting, he does so only because the Rebbe wishes it to be done. However, he personally doesn’t see the tremendous benefit out of it. So Rabbi Mangel replied, let me relate to you, the following story and then form your opinion.

There was a remarkable Rov, Rabbi L—n (he mentioned the rabbi’s name and city, however, out of respect for the family, I decided not to publicize it), who lived out in the Midwest. He wrote some seforim and came from real prestigious lineage, one of the Maggids outstanding students. He had a daughter who was extremely bright and went to college. She excelled in her studies and was quite popular making many friends, but to parents horror, she began dating a non-Jew.

The parents promised her the world if she would break off that friendship, but to no avail. She then informed them that not only is she maintaining this friendship, but they are going to get married during the upcoming winter break, [which was shortly after Chanukuh].

The parents told her, we won’t be able to walk you down the aisle, as we cannot and will not participate in a marriage out of the faith, and to their shock, her reply was NO PROBLEM, I DON’T NEED YOU THERE.

The father was beside himself in anguish, he tried whatever he thought is humanely possible to stop this dreadful tragedy from happening, but to no avail, she was persistent and determined to marry that person. However, the father was also determined, so on intermediate days of Sukkos he flew in to New York, and came to the Rebbe on Hoshanah Rabbah.

On Hashonah Rabba, the Rebbe would would give out Lekach (honey cake) to those that couldn’t come and receive it on erev Yom Kippur. At that time he would wish and bless every individually with a sweet year.  The father took advantage of the opportunity and when he met the Rebbe, he poured out his heart about his otherwise talented and wonderful daughter, who refuses to bend in this point. He said, although I think I have done everything a father can do in such a situation, perhaps I am missing out on something and the Rebbe can advise me what else or additional thing I should do.

The Rebbe replied, “Wait until Chanukah.”

Rabbi Mangel continues, sometime later when Rabbi L—-n related the entire story to me, he said. At that time I thought the Rebbe was informing me that he also doesn’t have a solution at that time and he would try to figure out something in the next eight weeks. In all honesty it wasn’t so comforting.

I become sick from anguish. Once I was rushed to the hospital thinking I am having a heart attack. That is how panicky and sick I felt.

On one of the nights of Chanukah, my daughter was driving to college to attend an evening course. On the way there she passed by a large public menorah ceremony that the local shliach arranged, and noticed that many Jews who are otherwise not affiliated or/and non-observant, were a sizeable amount of the attendees.

She pulled off to the side of the road and stared at the celebration, the singing, dancing, and yes eating of the doughnuts and latkes. After some time she began thinking, many of these people are totally ignorant of Jewish customs, yet they are proudly and openly identifying themselves with a Jewish tradition, they know very little about. Their joy in declaring their Jewishness is real. While I, who was brought up with pride in being Jewish and is quite knowledgeable in its teachings and history, I am planning on walking down the aisle and turning my back on everything Jewish. That is just too ironic, to be true.

That night she came to her our [her parents] house for the first time in a many months and asked us for forgiveness for the heartache she caused us. Sitting by the burning candles she informed us how that public menorah ceremony, gave her this clarity and reached her neshoma.

Rabbi L—-n concluded, now I understand that when the Rebbe told me wait until Chanukah, he knew at that moment, how I would get my daughter back, and wasn’t pushing me off or stalling for time. He answered my request perfectly.

Rabbi Mangel concluded, After I related this to that shliach, I added, the shliach in that city didn’t even say a word to that girl, he didn’t even think she was part of the crowd he had managed to assemble, yet he reached her and in such a meaningful way. More powerful than the most eloquent speech he may have given.  So even if you don’t see the fruits of your activity, you should realize its impact is powerful and extremely effective. You are reaching Jews in the only manner they are presently open to.

So to the thousands of Shluchim and Shluchos, and our dear sons and daughters that went out this Chanukah or any day on Mivtzoyim, never be discouraged. The fleeting encounter you had with a Jew might be the catalyst and bring out the spark in his/her neshoma, causing it to shine extremely brightly.

May we soon merit seeing the kindling of the candles in the third Beis hamikdash, speedily in our days.

Rabbi Avtzon is a veteran mechanech and the author of numerous books on the Rebbeim and their chassidim. He is available to farbreng with and enthrall your community about our rich Chassidic heritage, and can be contacted at avtzonbooks@gmail.com

« Weekly Unique Photo of the Rebbe
Hey Teves in Paris »