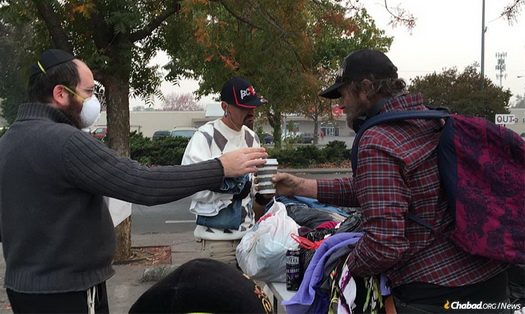 Rabbi Mendy Zwiebel, left, is out on the streets of Chico, Calif., often with his family, helping those who were devastated by fire. Residents are enouraged to wear masks due to pollution from ash that is everywhere, but not everyone complies.

It seemed like just a regular morning in Paradise. It was Nov. 8, and Randy Stein had an early-morning doctor’s appointment in the nearby town of Oroville, Calif. His wife, Lois, joined him, leaving their home intending to return a few hours later.

There was nothing to suggest that they would soon have no home to return to or that Paradise would soon be a wasteland.

But things were far from normal that morning. A wildfire was burning near the town of Pulga, and thanks to intense winds, it was spreading quickly.

Within hours, the disaster that would become known as the Camp Fire demolished the town of Paradise, caused massive destruction in the town of Magalia and threatened the city of Chico, taking it with it more than 9,700 homes, nearly 150,000 acres and, at last count, more than 76 lives. (Authorities expect that number to rise as more than 1,200 people remain unaccounted for.)

“By the time our appointment was over,” Stein tells Chabad.org, “we couldn’t get back in to Paradise. Everything was blocked. The entire area was black, like night. There were huge black clouds, and the temperature had dropped precipitously. It was like a

nuclear winter. You couldn’t see six feet ahead of you.

“I had a business called Randall’s Sheds that sold Old Hickory Sheds; the business was destroyed. The house is gone. It was total wipeout.”

His wife worked part-time in a day care that’s gone, too.

Yet the Steins know they were “fortunate.” Even though all they have left are literally the clothes they wore to that doctor appointment, they are alive. The same cannot be said for some of their neighbors. At least five people on their street were killed in the Camp Fire; four of them were in their cars, and one was found right outside of a vehicle.

“Paradise was just a small, close-knit community right up the hill from Chico. It was just a lot of retirees, a lot of people who couldn’t make it anywhere else because up until recently, real estate was fairly inexpensive in town,” says Stein.

Unexpected Death in a Close-Knit Community

Since the fire, the Steins—like many other displaced residents who are now dealing with, as Stein said “forced homelessness”—have been moving around. First, they stayed in a hotel in Reno, Nev., and then at a Red Cross shelter in Gridley, Calif., followed by a stay with some family. Soon, another move is anticipated.

All of this while trying to keep Lois Stein’s Type 1 diabetes in check—something that wasn’t easy given that she didn’t have her medical supplies with her.

“We are going to have to rebuild, and try and find a place to reconstruct our lives,” says Randy Stein. “I don’t think we can go back to Paradise because it’s all gone. We will have to find a new place to land.”

Lending a helping hand to Stein and many others are Chana and Rabbi Mendy Zwiebel, co-directors of Chabad of Chico. “They have provided us with meals and seeing the kinderlach,” as Stein calls the Zwiebels’ children, “has helped tremendously.”

Zwiebel clearly recalls the morning of the fire when he looked outside his window and could clearly see something was wrong on the horizon.

Though he and his family did not need to evacuate, many others in Chico did. Only in recent days have people started returning home; unless, of course, their home was in Paradise or Magalia.

In Magalia, even structures that were undamaged by the fires remain off-limits because of the toxins in the air from the wildfires. Unlike traditional wildfires that burn trees and brush, the smoke from the Camp Fire is filled with all kinds of pollutants as it tore through buildings, gas stations, cars and other industrial material.

The air quality in the region is so bad that people are advised to stay indoors and wear masks when they are outside. Schools in Chico are closed until the beginning of December.

However, there are many people who are outdoors, living in tents in the Walmart parking lot or other spaces because they have nowhere else to go. Authorities are working to get them into different locations because between the air quality and rains that are expected in the area this week, the parking lots are just not safe.

“There just isn’t enough housing,” says Zwiebel, noting that some people are picking up and leaving town, though others are staying because they work in Chico or simply don’t know where else to go.

And while people in Chico and surrounding areas in Butte County, Calif., have opened their arms and donated clothes, toiletries and other goods, these items aren’t what people most need right now.

As a message posted on the official Butte County Twitter feed said on Nov. 16: “Thanks to the generosity of the community, we have enough donated items for evacuees and can’t take any more items. Thank you!! The best way to support the community is by monetary donations,”

“I keep getting calls from asking what can we do,” says Zwiebel, “and I say give a gift card—send money because those who’ve lost their homes have no place to put any stuff. We are trying to raise as much money as we can, and it will all be distributed.”

Estimating the Cost of Devastation

Already, Chabad of Chico has given out nearly $8,000, but Zwiebel says “that’s a drop for what’s really needed. I was just in touch with someone today who doesn’t have insurance and lost everything. They are going to stop by today, and I will [try to] help them out financially.

“How much money do we need? It’s hard to know. There are people who think they are okay now, but who may not be okay in two or three months. It’s a long haul. It’s hard for people to realize what they’ve lost, and some people are not comfortable taking money and all of a sudden, they need it. Then there are people who might have some money in bank now, but that won’t last long.”

Says Stein: “The devastation was so complete, and there’s no place to go back to—you are in a form of forced homelessness. There are a lot of seniors just roaming who don’t know what to do.”