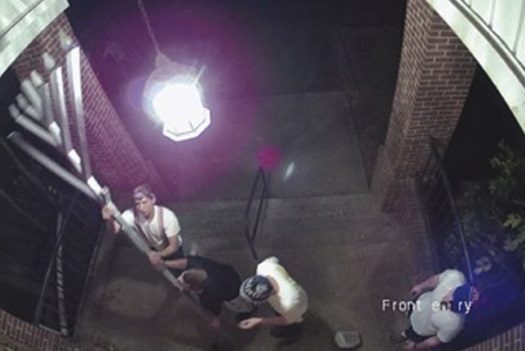 Police are trying to find those responsible for taking a menorah from outside the home of a rabbi at Penn State University, and leaving it damaged in front of the Sigma Alpha Mu Jewish fraternity.

Rabbi Hershy Gourarie, co-director of Chabad of the Undergrads at Penn State University, said police are trying to find four suspects seen in surveillance footage outside the fraternity.

The large menorah was taken from outside his State College home overnight Oct. 27 while he was observing Sabbath, and was found damaged at 7 a.m. Oct. 28 at the fraternity, he said. Gourarie noted that he hosts many Penn State students at his home.

Gourarie said he knows that none of the Sigma Alpha Mu Jewish fraternity members were involved in the incident. “Sigma Alpha Mu was also a target of this incident and they have been working closely with Chabad and with the police since the menorah was stolen,” he said in a statement.

Gourarie says he has been in contact with campus faculty and police to try to identify the men who stole the menorah.

“Chabad’s response to this incident will be to rebuild the menorah and increase in programming which will be aimed fostering increased awareness and pride of our Jewish heritage,” he said in a statement.

Gourarie estimated the cost of damages to be $1,800.

“We are obviously disturbed by this incident, but we want to take proactive steps to make sure this doesn’t happen again in the future,” he said.