« Pol Who Slandered ‘Jewish Landlords’ Now Accused of Pandering to Them
Photos: Chai Elul Farbrengen in 770 » 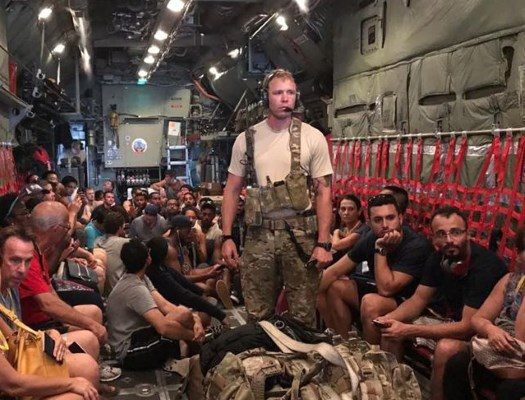 CrownHeights.info has learned that a story we published yesterday about the family of Shluchim on the Caribbean island of St. Martin being rescued on Shabbos was factually incorrect. In fact, the Shluchim evacuated to Puerto Rico by the U.S. Military on Friday, having arrived before Shabbos began.

From the Yeshiva World News:

While many reports have been published about the rescue of the family of the Chabad Shliach to the Caribbean Island of St. Maarten, YWN has learned that they are false.

The following is exactly what occurred.

As had been reported by YWN, Hurricane Irma caused catastrophic damage to the Island of St. Maarten.

Rabbi Moishe Chanowits, his wife Sara and five children aged under 8, remained on the Island to offer assistance to others during Hurricane Irma, but were left without a decent place to stay. There is no running water, no power, and no fuel. The Chabad House had been running on a small generator, but the gas supply has been dwindling. (YWN reported on Thursday how they survived by sheltering in the Mikva area.)

Rabbi Mendel and Rachel Zarchi, co-directors of Chabad Lubavitch of Puerto Rico and who oversee Chabad in the Caribbean, sprung into action. A team effort was launched by Central Chabad, together with Chabad Executive Director Rabbi Mendy Kotlarsky and the Chabad Lubavitch Headquarters, and the joint effort began.

Rabbi Chanowits was informed of this, and he was able to secure seats for his family on the flight through local contacts.

The evacuation flights began on Friday as the C-130s began taking those needing the most urgent medical care.

According to the Puerto Rico Air National Guard, 1,268 American citizens were evacuated on 11 flights Saturday and Friday.

Thankfully, the Chanowitz family was safely removed from the Island before Shabbos, and landed safely in Puerto Rico.

YWN spoke with Rabbi Zarchi on Sunday afternoon, who informed us that the Chanowitz family had just boarded a commercial flight back to the New York area.

“More important was the Achdus displayed by the many Chabad Shluchim around the world – in conjunction with selfless individuals who were committed to Chessed to do anything to help Yidden in an Eis Tzara – working together in a tireless effort to rescue the Chanowitz family. Ultimately, the Shliach that rescued them was the U.S. Military – which truly deserves the credit”.

Meanwhile, YWN has learned that the Chabad Shaliach of the Island of St. Thomas which also suffered tremendous damage, will be boarding a boat with his family for the 50 mile trip to Puerto Rico. The situation is St. Thomas is dire, with reports – confirmed by YWN – of people being held up by machete in the street.

Additionally, thanks to he hard work of the Shliach in St. Marteen, 5-10 Israeli National’s were just granted permission to be evacuated on a U.S. Military C-130. They will be greeted at the airport in Puerto Rico by Rabbi Zarchi on SUnday evening. They will be given shelter and Kosher food until things settle down, and will be able to continue out of the area by commercial flights.

Once again, the U.S. Military must be thanked for not only rescuing the Chanowitz family, but for rescuing 10 Israeli’s off the Island as well.

« Pol Who Slandered ‘Jewish Landlords’ Now Accused of Pandering to Them
Photos: Chai Elul Farbrengen in 770 »