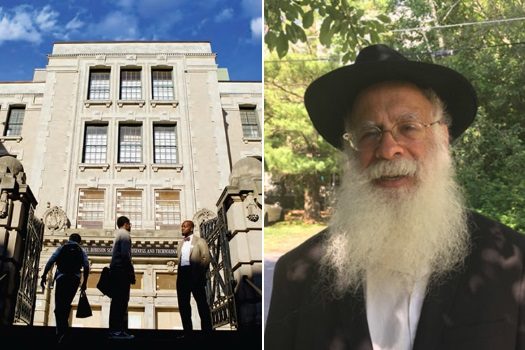 from the Jewish Voice by Anat Ghelber:

P.S. 191, also known as The Paul Robeson School, sits at the border of Crown Heights and Brownsville.  The school’s student population, around 300 suffer from poverty to the extent that 99% of them meet the standards for free or reduced-price lunches. Some even live at a homeless shelter next door.  But, at 8:30, every morning, just like clockwork, a moment of silence is observed.  It may only last for one minute, but for that moment, the entire school is quiet.

The moment is announced over the school’s loudspeaker system by both teachers and small number of students.  In the announcement, the entire school’s population (student and faculty) is asked to think about something positive for the silent minute. It can be something like what they want to achieve that day, how they could help someone else, or whatever they like, as long as they remain entirely silent for that 60 seconds.

The positive effects of a moment of silence haven’t gone unnoticed at P.S. 191.  As one supervising school aide put it, “I have seen tremendous changes behavior-wise and in terms of punctuality.  The kids want to be here for the moment of silence. When they miss it, you can see they’re upset.”

The idea of the moment of silence was first introduced to P.S. 191 by a Hasidic Jew named Avraham Frank.  Three years ago, he walked right into the school to speak to the school’s principal, and suggested the entire school be silent for exactly one minute in the morning. In doing so, he was honoring the wishes of the last Lubavitcher Rebbe who desired that all public school have a daily moment of silence.  Since then, the 59-year-old manager for home attendants for New York City’s Human Resources Administration has convinced the faculty administrators of 13 different public schools in Manhattan, Brooklyn and Queens to initiate moments of silence in their daily routines.  His desire is to have moments of silence be observed at schools, “all over the city.”

Click here to continue reading at the Jewish Voice.