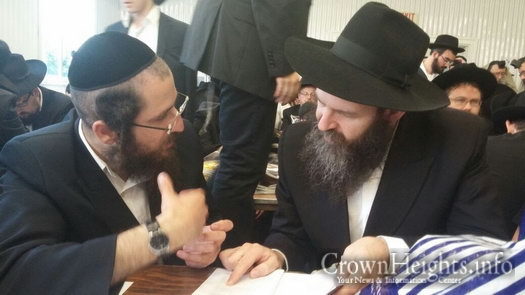 It only started about a month ago, but is already growing rapidly and gaining interest. “Memaleh Kol Almin” is the unique name of the new program which arranges, matches, and connects study partners in Chassidus from all over the world.

What makes this project different is that the matches are made between shluchim and young men from other Chassidic courts. The young men are familiar with the term Chassidus, but wish  to regularly learn maamorim and sichos in a deep, challenging way.

Currently there are already tens of chavrusa – pairs from all over the world who, once a week, connect and learn together by phone. Of course the connection is not just one of studying, but much deeper than that, as has been seen from the surveys they were asked to fill out recently.

This initiative is but one of the “fruits” from a chassidishe farbrengen that took place at the Ohel late on Shabbos afternoon, Gimmel Tammuz this year. Chief Rabbi of Russia, Berl Lazar voiced this idea, and immediately participants at the farbrengen made up with each other to begin studying together.

Rabbi Yosef Filmer, one of the projects administrators, says that there are now close to fifty pairs of chavrusos actively learning together globaly. There is a weekly Torah- connection between Siberia and Bnei Brak, Kazan and Elad, Moscow and Yerushalaim, and many many more cities. There have also been requests from young chassidim from North America to join, and there is still much room for growth. A special thank you to Rabbi Chaim Shaul Bruk, director of Vaad Hanachos in LaHaK, who has been tirelessly working to make this project better and greater.

Study schedules are now being planned for the month of Elul, as well as more ways to help this amazing project grow, and Toras HaChassidus to spread all over the world!

Shluchim who are interested in joining this project, please write to: memalekolalmin@gmail.com.