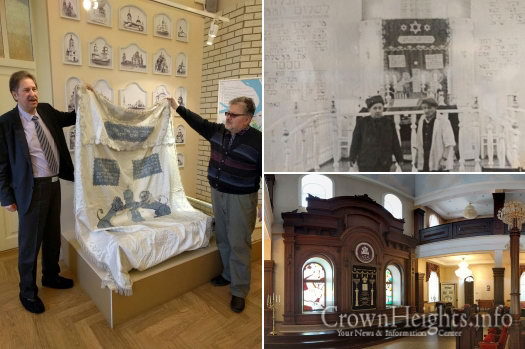 The Jewish community of Irkutsk, a city in the Russian far north of Siberia, has recently relived an exhilaration  like no other: the ancient parochet, the decorative cover for the alcove containing Torah scrolls in the city synagogue, that mysteriously disappeared over a hundred years ago, was returned home through courageous efforts of its rabbi and with the help of no one other than the city mayor himself.

The parochet was discovered a few months ago in the archives of the city Historical Museum. Upon hearing the news, the rabbi of Irkutsk, rabbi Aharon Wagner, visited the museum to see the parochet with his own eyes. “I was really moved to see the parochet, the same parochet that hung in our synagogue over 100 years ago, and especially now, when after renovations the Aron haKodesh – the scrolls’ alcove – was re-instated to the same place it was at that time,” rabbi Wagner said.

The heads of the community began trying to find ways of re-establishing the rights to the parochet in order to return it to its righteous place. “Of course the museum management was not happy about the idea. They claimed that once the parochet is exhibited in the museum, it will be a valuable addition to the presentation of the city’s multi-cultural history, and thus attract more diverse visitors, facilitate inter-cultural dialogue and so on,” rabbi Wagner explains.

Over the Purim holiday in March rabbi Wagner’s synagogue welcomed many guests, among them the mayor of Irkutsk. The rabbi seized the moment and brought up the topic before the mayor. “I told the mayor that there is the parochet that belongs to the Jewish community of the city in the museum archives and explained to him how dear it is to us that it be returned to the synagogue, to the place where it belongs. I promised that it will be displayed here for everyone to see and won’t ever be taken down,” he says.

The building of the synagogue is well known to the city officials – it’s a historical building that has  recently undergone renovations and is even registered in the city preservation fund. As such, it annually attracts thousands of tourists and visitors, both Jewish and not. This was an additional argument the congregation used to prove that the parochet will remain a cultural artifact of the city, attest to the deep-rooted Jewish history in Irkutsk and strengthen multi-national ties.

Finally, after continuous efforts, the museum management informed the rabbi and the congregation that the parochet would be transferred to the synagogue, for now to be on display in a glass case near the original alcove. “We are hoping that closer to Yom Kippur we will be able to hang the parochet over the synagogue’s Torah scrolls, restoring the righteous glory to our prayer room,” rabbi Wagner adds. Last Friday the parochet arrived and can now be seen by everyone, testifying to the continuous Jewish presence in the city.