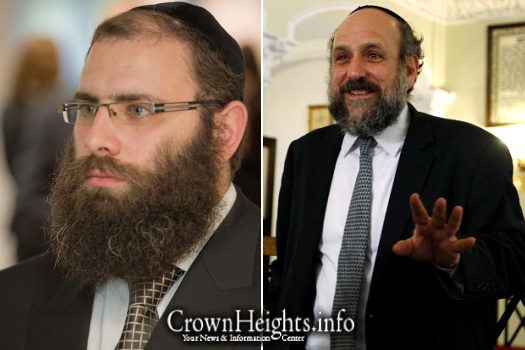 Left: Rabbi Margolin of the EJA. Right: Rabbi Schudrich of the CER.

The Jewish organizations that did not succeed in preventing the legislation banning on kosher slaughtering in Poland continue to try and sabotage the efforts to changing the law.

The Chabad-affiliated European Jewish Association (EJA) and the Rabbinical Centre of Europe (RCE), who are leading the efforts against the Polish Parliament’s legislation banning kosher butchering, have hired the services of Lawyer, Roman Giertych in order to appeal the matter before the Polish Constitutional Tribunal.

Giertych who is the former chair of the League of Polish Families party, was one of the first right wing party leaders in Poland, to come out against anti-Semitism in the country, and strengthen his position by visiting the Holocaust memorial in Jedwabne – where thousands of Jews where murdered in 1941.

Giertych was hired as a part of the efforts conducted by EJA General Director, Rabbi Menachem Margolin, with Polish Minister Michał Jan Boni, to revise the ban on kosher butchering in the country.

On the opposing side, people close to Rabbi Schudrich, a member of the Conference of European Rabbis, that have failed in the quest to prevent the legislation from being approved by the Polish Parliament, not only did not admit their mistakes but issued a statement condemning EJA’s vigor activities that receives full cooperation from the Polish Government and its representatives in the European Union.

After Poland’s chief Rabbi and Conference of European Rabbis’ colossal failure in preventing the ban on kosher slaughtering in Poland, a significant number of members of the Jewish world have called upon all Jewish organizations to rise above minor differences and come together in order to revise the decree, that can have major implications on the entire European Jewry.

It was only when this call was not answered by Poland’s chief Rabbi and the Conference of European Rabbis, that the EJA (representing over 20 Jewish organizations across Europe) and the Rabbinical Centre of Europe (with over 800 Rabbi Members) have volunteered to conduct their intensive lobbying.

The EJA and RCE that have succeeded in the past few month in their struggles against the ban on kosher slaughtering in Holland and the German court’s verdict banning circumcision, have dedicated all professional efforts to the matter and have conducted instant meetings with Polish representatives in the European Parliament.

Due to the quick and effectiveness of his actions, Rabbi Margolin was invited to take part in the special committee headed by Minister Michał Jan Boni which was established by the Polish president in order to find a solution to the problem.

Rabbi Margolin held a special meeting with Minister Boni in Brussels and together with Poland’s ambassador to the EU, Marek Prawda; he started coordinating the efforts in preparation to the reinstatement of kosher bothering in the country.

“The situation of kosher butchering in Poland is very problematic and can spread to other European countries.” Said Rabbi Margolin and emphasized: “for a long time the EJA, RCE and other European Jewish organizations have offered help to Jewish community leaders and the chief Rabbi in Poland in preventing the legislation. Unfortunately, not only have they declined our outreach, but in their zeal, they are jeopardizing kosher butchering all over the continent. Therefore, all we can do is operate with resolve as we have proven in other countries in order to overturn the decision. Whoever is willing to rise above minor disagreements and join this important cause is very welcomed.