Shmuel Butler just returned from Vietnam. The 21-year-old rabbinical student spent five weeks serving the needs of Jewish expats and tourists, and reports that being in the Communist nation is “like being on a different planet.”

Together with 20-year-old Ari Herson, Butler spent much of his time combing the tourist-heavy parts of Hanoi, meeting Jewish men and women from all over the world. They offered them the opportunity to perform mitzvahs, and invited them to Shabbat meals and other events in the northern part of the country at Chabad of Hanoi, co-directed by Rabbi Leviand Mushky Laine. (Chabad of Vietnam in Ho Chi Minh City covers the south.)

In describing their adventures, Butler often refers to hashgachah pratit, the notion that everything that happens is orchestrated by G‑d.

“There was one time that we sent off an order from Chabad’s kosher restaurant by Uber, only to remember that we forgot to send the drinks. We called back the car—a hassle since almost no one speaks English—and were outside handing them to the driver. Suddenly, we noticed a moped driver making a short stop right next to us.

“We looked and saw that it was a Westerner, and his face was as white as sheet. Turns out he was a Jewish man from South Africa living in Hanoi teaching English. When he moved to Vietnam, his mother had asked him to connect to Chabad, but he was so sure that there was no Chabad centerhere that he didn’t even bother checking,” continues Butler. “He was having a hard day and had gone for a drive to clear his mind. He was passing by the Chabad House—in a small alleyway he almost never uses—when he saw us outside giving the drinks to the Uber driver. For the rest of our stay, we remained connected and studied Torah with him on a regular basis.”

The students related many “only-in-Vietnam” moments, such as shopping in a large Western-style store that had only three cars in the parking lot (and about as many shoppers), but several hundred employees waiting to rearrange the shelves the moment a product was removed by shoppers.

They were also greeted by the jarring presence of soldiers on virtually every street corner.

At the infamous Hỏa Lò Prison (known to Americans as the “Hanoi Hilton”), Butler and Herson toured the prison-turned-museum, where extensive propaganda supports the Vietnamese claim that Westerners were treated with kindness. “At one point, we saw that a couple was taking pictures of us,” says Butler. “We introduced ourselves and discovered that they were Israelis who were stunned to learn about Chabad’s presence in Vietnam.”

True to the moniker given to young men who participate in the Merkos Shlichus “Roving Rabbis” program, the two trekked to several other locations in Vietnam.

They took a nine-hour bus ride to Hà Giang, a province bordering China, known for its forested limestone and granite mountains. In addition to meeting Israeli tourists, the two had an important mission: to print an edition of Tanya, the foundational work of Chabad teaching, authored by the first Chabad Rebbe, Rabbi Schneur Zalman of Liadi.

It’s a tradition that began in 1978, when the Lubavitcher Rebbe—Rabbi Menachem M. Schneerson, of righteous memory—called for the printing Tanyas all over the world. Since then, more than 6,700 editions have been printed, with thousands of people touched by the wide-reaching and never-ending publishing endeavor.

The Rebbe specified that at least 100 copies should be printed wherever Jews may find themselves, and that those local Jews actually learn from the freshly imprinted pages. But it was more than just a learning campaign, the Rebbe explained. For if the goal was simply that everyone should study Tanya, it would have been sufficient to send copies to the Jews of each city and encourage them to study. The Rebbe said the fact that the Tanya was printed in their own hometown would encourage them to explore the text on a much deeper level.

In the past few years, Butler has printed as many as 50 editions of Tanya, including six of them last summer in Jamaica.

They had taken a printer with them to Hà Giang, but it had broken. By hashgachah pratit, there was a printing shop around the corner from their accommodations, and they were in business.

On their bus back to Hanoi, they were pleased to meet an Israeli tourist. After hearing why the students were there, the man gratefully took them up on their offer to join them for Shabbat that Friday night.

They also traveled to tourist-rich Hạlong Bay, listed by UNESCO as a World Heritage Site and included among the New7Wonders of Nature.

Now back from their jaunt, the two passed on the contact information of their newfound friends to the Laines as they prepare for their next task: Butler will conclude his rabbinic studies in Brooklyn, N.Y., and Herson will do so in Morristown, N.J. 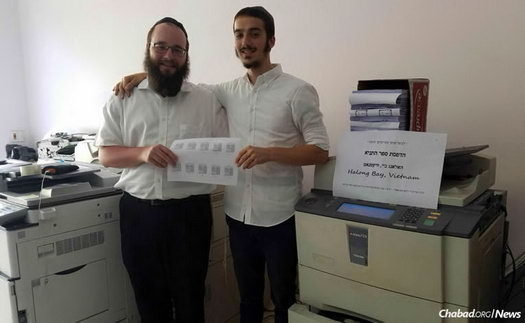 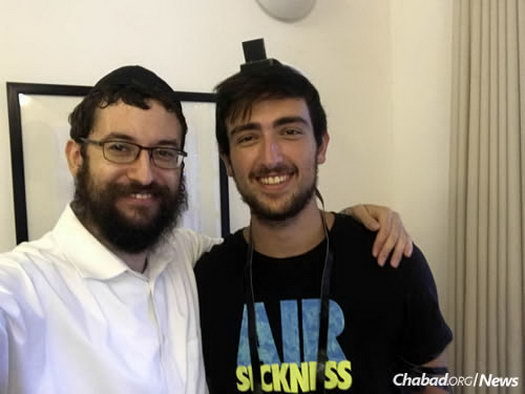 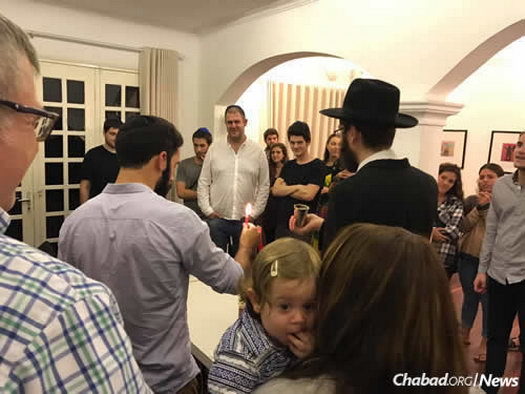 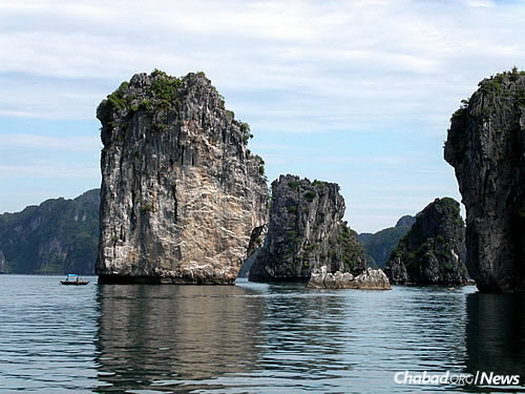