« Video of the Day
Gezunthait, the Performance Trailer » 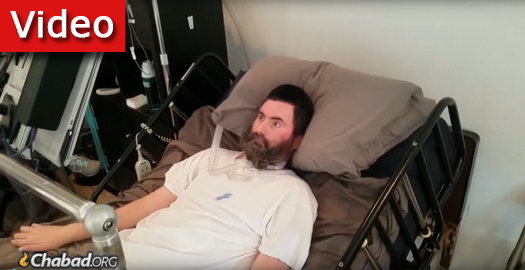 The voice-synthesized words were tinny but unmistakably heartfelt, as Rabbi Yitzi Hurwitz expressed his appreciation for the thousands of mitzvahs done in honor of his 47th birthday.

“I would like to thank all of you who participated in the #tefillinforyitzicampaign and the #shabbatcandlesforyitzi campaign,” said the rabbi who was immobilized by ALS (Lou Gehrig’s Disease) and speaks and teaches via a computer that tracks his eye movements. “They were truly amazing. It was like an endless birthday gift with a stream of pictures and videos constantly coming in from all over the world—and they are still coming in. I would like to especially thank those who spearheaded the whole thing and saw it through.”

“I cannot begin to tell you how beautiful and exciting it was. Every mitzvah, tefillin and Shabbat candle that came in—I really felt love Thank you so much. I am so grateful, it was the best gift. I hope that each and every one of you will continue to grow in your mitzvot, as so many of you have written to me. That you would continue to light Shabbat candles and put on tefillin—really every mitzvah that you add—will bring blessing to you, your family and to the Jewish people. If you are already doing mitzvot, perhaps you can find a way to do a mitzvah nicer or with more thoughtfulness. That would give Hashem so much pleasure.

According to organizers, the campaign followed last year’s successful “gift,” in which an estimated 10,000 Jews around the world donned tefillin or did another mitzvah in honor of the rabbi who currently lives with his family in Los Angeles.

This year, they set out to up that number to 15,000. How did they do? According to their tallies, as many as 23,000 mitzvahs were reported done by Jews around the world, including TV show host Larry King, who sent a video message to Rabbi Yitzi.

The campaign is in possession of 4,550 pictures and videos and has thousands of emails documenting the balance of the mitzvahs done.

« Video of the Day
Gezunthait, the Performance Trailer »