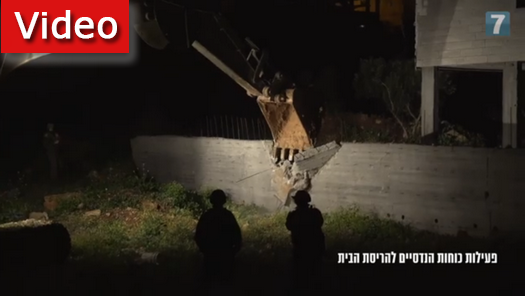 IDF troops, along with Border Police and the Civil Administration, demolished the residence of Assem Barghouti in the village of Kobar, north of Ramallah, the IDF confirmed Thursday morning.

Palestinian Arab media reported on Wednesday night that IDF soldiers had entered the village of Kobar, near Ramallah, in order to demolish the home of terrorist Assem Barghouti.

Barghouti carried out the attack in Givat Assaf about three months ago, in which two soldiers from the haredi Netzach Yehuda Brigade, Yovel Mor Yosef and Yosef Cohen, were murdered.

Earlier this week, the Supreme Court permitted the demolition of the home of Barghouti, who was also a part of the terrorist squad that carried out the attack in Ofra, in which baby Amiad Yisrael Ish-Ran was murdered and seven others were wounded.

Justice Neal Hendel wrote in his ruling, “I will make do with saying that the secret material which we have examined, with the petitioners’ consent, unequivocally supports the first option (effective demolition), and teaches that the general deterrence effect is still valid. I will add that the material presented is comprehensive, complete and balanced, and in many ways even surprising in its intensity.”

In early February, the commander of the IDF’s Central Command, Major General Nadav Padan, signed a demolition order for the home in which Barghouti lived.

Meanwhile, the family of the terrorist Arafat Irfaiya was notified on Wednesday morning of the IDF’s intent to demolish the terrorist’s residence.

The terrorist murdered Ori Ansbacher in a forest near Jerusalem on February 7, 2019. The family of the terrorist was given the option to challenge the IDF’s intention.

Irfaiya is currently under arrest and will soon be indicted.